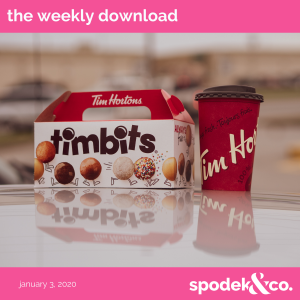 Here’s what all the buzz is about this week: Instagram launches Layout, Facebook predicts 2020 key trends and topics, Google Health and DeepMind imagine the future of tech in healthcare, and Justin Bieber calls out Tim Hortons. Plus, we’ve got some Disney-themed Friday Fun to wrap things up for the week!

After testing a Layout mode for Stories back in August, Instagram has finally launched the new feature.

Strike a pose. And another pose. And then another. 📸

With Layout, you can now capture and share multiple photos in your story — a new, creative way to express yourself. Check it out! pic.twitter.com/j02aYOjsoO

The new functionality will allow users to incorporate six different grid display styles for still images within a single frame on Stories.

Have you tried Layout yet? Let us know your thoughts below.

Trying to predict what topics might be popular in 2020 for future strategy? It might only be day three of the new year, but you’re certainly not the only one!

Facebook is sharing its The 2020 Topics and Trends Report, a 30-page ebook based on examination of on-platform conversation shifts over the last two years.

The company has published similar reports in the past but only included data limited to the US market. This year’s prediction report includes trends from four regions — Asia Pacific, Europe, Latin America and North America — and 14 countries within them.

Some notable trends from the report: gardening, indoor plants and beekeeping in Canada, baths and podcasts in the US, maker culture in Brazil and vintage clothing in the UK.

Have you ever read a more Canadian headline?

Stratford, Ont.-born singer and celebrity Justin Bieber took to Instagram last weekend to poll his followers about a big issue in the lives of many Canadians: Tim Hortons’ new lids.

@timhortons I know they could leak but it was easier to drink out of.. the coffe would come out better.. these new lids are uncomfortable on the mouth, and you get very little liquid each drink it's a damn outrage and needs to be changed back. Tbh it shouldn't be plastic find a way to be recyclable let's change the world 1 lid at a time

Bieber asked if others missed the coffee chain’s old lids – the ones that peeled back and folded down to provide an opening to drink out of – and it’s no surprise that many answered “yes.”

We're making a a change one lid at a time. Thanks @timhortons

According to Justin, he’s reached out to Tims via DM. Do we see a collaboration coming in the future? Stay tuned!

We’ve often wondered what role technology will continue to play in our world — particularly the healthcare field — and it looks like this latest news might offer a glimpse.

Google Health and DeepMind claim to have created an AI tool capable of outperforming human radiologists when it comes to spotting breast cancer on mammograms.

The AI was trained on two datasets of mammogram scans from the US and UK, then pitted against the findings of six radiologists. According to the data from the study, the application of the AI outperformed all radiologists on average by 11.5%.

While the research is still at an early stage, DeepMind suggested the technology could be used in the future to give radiologists an automated second opinion when reading scans.

This Instagram Filter Will Tell You What Disney Character You Are

Ever wondered if you’re more like Cinderella than Ariel? Or maybe more like Ursula than Cruella DeVil?

There’s a new viral filter on Instagram Stories that will reveal your perfect Disney character match, and it’s been used and shared by friends, family, celebrities — and even some pets — from around the world.

While the filter doesn’t seem to be based on another other than randomization, people are sharing their reactions and posting their results via Stories.

Have you given the filter a try? Share your results with us!