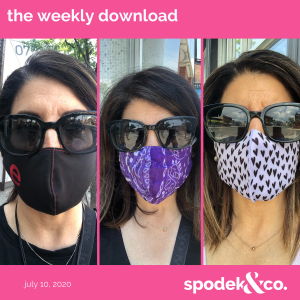 Happy Friday and welcome to The Weekly Download! Before we dive into the weekend, let’s catch up together on some of this week’s biggest news stories:

In the wake of global ad boycotts to #StopHateForProfit, Facebook CEO Mark Zuckerberg met with leaders of the NAACP, the Anti-Defamation League, the Free Press, and the Color of Change this week.

According to the leaders present in the meeting, things didn’t go well.

In a blog post published by Free Press Co-CEO Jessica J. González, Zuckerberg’s efforts appeared to be “nothing more than a PR exercise” that resulted in “no commitment.”

.@DerrickNAACP says @Facebook is more interested in having dialogue than generating outcomes. They allow white supremacist groups and hate groups to gather and recruit. We should expect more from a company like Facebook. #StopHateForProfit

According to a comment released by Facebook in response to González’s blog post, the meeting was an opportunity to reaffirm commitment to combating hate on the platform.

Since the meeting, Facebook published its own civil rights audit, scrutinizing the social media giant’s decisions to prioritize free speech above other values. According to auditors, Facebook’s current policies are a “tremendous setback” that provide a forum for white supremacy and white nationalism.

A Toronto woman who was forced out of a local hospital following her refusal to wear a face mask encountered lots of negative backlash on social media this week, drawing condemnation from local officials, celebrities, and more.

Since being posted to Twitter on July 4, the original video of the encounter shared by Twitter user Letitia Montana using the hashtag #filmyourhospital has been viewed over 6 million times.

Put the camera away and don a mask inside public places, *especially* hospitals. Doing so protects others – you know, your fellow humans. https://t.co/CraeNc2GL4

Wear a mask in a hospital if they ask you. Just like those surgeons when they operate. Hospital workers are not propaganda believers. They are trained medical professionals. All the best.

This is a new level of moronic and entitled. https://t.co/RkAzVgDC9F

While the video was likely shared by Montana in an effort to draw support for her refusal to mask up, it’s evident that things didn’t quite work out the way she had hoped. Montana, who self identifies as a “truther”, says she stands by her decision not to wear a mask in the emergency room.

Experts Urge Canadians to be Wary of TikTok

While TikTok’s popularity continues to rise with over two billion downloads worldwide, so do privacy concerns – specifically surrounding data sharing with the Chinese government. TikTok has consistently denied these allegations, but experts are wary.

According to David Skillicorn, a professor in the School of Computing at Queen’s University, the app has several security concerns. Says Skillicorn, “Anything TikTok knows about, assume China knows about as well.”

FB5 Rolls Out For Desktop and Mobile

The “New Facebook”, also known as FB5, is now available to users around the world. Complete with site-wide dark mode, FB5 is Facebook’s most dramatic redesign yet.

The new design is a cleaner, brighter, and more contemporary version of the app with a greater focus on personal conversations and connections through Groups.

Learn more about the updates and how you can access FB5 here.

Have you ever prepared to meet with a new contact and worried about how to pronounce their name? You’re not alone! There’s good news: LinkedIn is adding a new feature that will allow users to hear how other members pronounce their own names.

The update to the interface will allow users to record up to 10 seconds of audio via the app to pronounce their names. Others can listen by clicking an icon on a user’s profile when browsing LinkedIn’s app or website.

While the new tool is helpful to many, there is still a huge accessibility issue for users who are deaf or hard of hearing. LinkedIn says it is working to “build in accessibility features” but doesn’t offer any means for written pronunciation at this point.

The update will be available to all LinkedIn users beginning later this month.

Based on a posting for a senior full-stack software engineer, a possible paid subscription service could be on the horizon for Twitter.

According to a report from Mashable, the posting reads:

“We are building a subscription platform, one that can be reused by other teams in the future. This is a first for Twitter! [The new team] Gryphon is a team of web engineers who are closely collaborating with the Payments team and the Twitter.com team.”

While no one at Twitter has offered any further comment on the potential paid platform, some users have made predictions about what the model might look like. News outlets could offer breaking news or in-depth reporting to subscribers before sharing with non-paying followers. Celebrities and influencers could charge for access to their tweets.

What are your thoughts about a paid version of Twitter? Would you pay to read tweets?