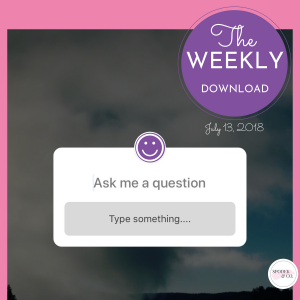 Happy Friday! Another excellent week has lead us to another edition of the Weekly Download. Today, we’re discussing how social media can save lives, Snapchat Lens Explorer, Facebook’s augmented reality ads, AND Instagram Question Sticker with some Friday Fun.

In May, a Toronto blogger and NZ native, Claire Nelson, headed to Joshua Tree National Park in California to embark on an independent day hike on a popular trail. Somehow, Nelson was led astray off the path, finding herself lost. She decided to get some height to see if she could locate the path from higher up. As she stepped on a large rock, “it slid like ice” and she fell hearing a loud crack.

Nelson fell almost 5 metres to the ground breaking her pelvis and sacrum in multiple locations. Wedged between two boulders and injured, she was completely immobile. Her cell phone had no reception to reach emergency services so she “decided [she] just needed to say alive long enough to be found.” Running out of water, drinking her own urine and building a make-shift shelter, were only a few of the survival tactics used during Nelson’s four days and three nights in the desert alone.

After a couple of days of Nelson not posting online to Instagram, her followers knew something was wrong. Nelson, a travel blogger and freelance writer, is expected to be online. Her followers and friends called her in. She was rescued by Riverside County Sheriff’s Department who spotted her from a helicopter.

Without Instagram, Claire Nelson may not have had such a “stroke of luck.” Social media keeps us all connected and has a multitude of purposes. Who knew your online profile could save your life?

I was initially hesitant about sharing this pic because it makes me feel a wee bit uneasy. It’s the only photo I have that shows the area where I was stranded. And MAN, I really was in the middle of nowhere. ⚡️ Here I was sittin’ in the shade having a drink of water, assessing the view and trying to figure out where the trail was. I still don’t know why I didn’t check my phone GPS, because if I had, I’d have realised that I WAS NOT ON THE TRAIL. I was actually about a mile off track, just scrambling through random desert. ⚡️ Testing my footing, I slipped on the large rock seen on the right, and dropped straight down, effectively swallowed up by the boulder stack. Looking at this photo I realise why my screaming for help was futile. Who the hell was going to hear me? How did the rescue helicopter ever find me? ⚡️ While nobody ever heard me, the helicopter crew eventually DID see me, on that fourth day, on their last flyover, as I furiously waved my hat on the end of a stick. 🚁 Manny and Eric from the Riverside County Sheriff’s Department, you are legendary. (Without them I could still be out there. And maybe never found. I try not to think about that.) So I am counting my blessings, you guys. Counting all dem blessings. 💛

On Tuesday, Snapchat announced to their users that they had introduced a new feature. According to Snapchat’s newsroom, Lens Explorer allows Snapchatters to “discover and unlock thousands of Lenses built by Snapchatters around the world!” Lenses are different filters that can alter the users face or the backgrounds of their photo content in fun and unique ways.

Using this new feature is easy. Simply swipe over to the Explore page, visiting Lens Explorer, and “tap the new icon that appears when the Lens Carousel is active.” Any tile that you click will activate your Lens of choice from anywhere around the world.

Since 2017, over 2.5 billion Lenses have been used and over 100,000 different Lenses have been created. Snapchat’s huge success with their platform and their Lens filters have been famously copied by Instagram and Facebook. We will keep our eyes open to see if they follow suit yet again.

Snapchat's Lens Explorer Guides You Through a Land of #AugmentedReality Creations https://t.co/vjE8JbWaBc pic.twitter.com/WCKf5gcQ4f

Brands are now able to infiltrate the lines of reality with their products over Facebook. These ads use your face to activate virtual cues, acting as virtual showrooms for products. When scrolling, these ads will look the same in your feed, however, they will feature a “tap to try on” selection. This will allow Facebook users to virtually try on sunglasses, makeup and more, without leaving the comfort of their own home.
According to Facebook, Michael Kors was the first brand to experiment with AR ads and other brands like Sephora, Pottery Barn, Wayfair and King are soon to follow this summer.

We’ve seen it blowing up in our Instagram Stories over the past couple of days. Instagram’s Question Sticker is already proving to be quite the hit. This new feature is another outlet – like the emoji slider and the polling sticker – for users and their followers to interact with one another.

This new feature will be an excellent opportunity for brands to use the platform to get to know their followers better. Live Q&A’s over Instagram and Facebook can be challenging when trying to read the questions as they come in, or finding the valuable questions in general. This gives brands and businesses to have more control over their dialogue.

Drake’s new single has started a viral video movement over social media. The #InMyFeelingsChallenge has people dancing around the world. From pro-athletes to grandmas to influencers, everyone is doing it. Here are a few of our favourites!