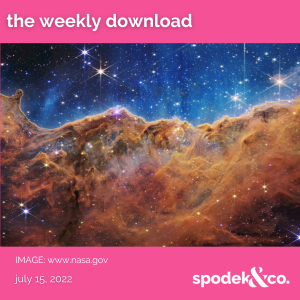 Happy Friday! It has been a week, and only part of that is because of the latest shenanigans courtesy of Elon Musk and Twitter. (U.S. legal Twitter has been having the best time looking at the recently released docs.)

Other than that, find out what the most popular emoji in Canada is, how you can ghost your way out of a Twitter conversation, the head scratching over Instagram’s new Notes function, how creators are using all the short-form video formats on TikTok, YouTube, and Instagram, and finally, the first stunning pictures from NASA’s James Webb Space Telescope.

Twitter Cites Use of Poop Emoji in Legal Battle

We know that emojis convey a ton of emotion and conversation — just ask the teens in your home. Elon Musk, who has been quite hesitant to commit to his purchase of Twitter, got served evidence that cited his use of the poop emoji to disparage the company.

As you already know, Twitter is suing Musk for trying to back out of the US$44 billion deal, asking that the billionaire be made to complete the purchase.

Musk continues to troll pretty much everyone on the platform.

What Is the Most Popular Emoji in Canada?

Speaking of emojis, Crossword Solver analyzed nine million geotagged tweets from around the world to find the most popular emoji as part of the upcoming World Emoji Day on July 17. Turns out Canadians like the crying laughing/tears of joy emoji.

The United States also likes to cry-laugh, while countries in Central America and the Caribbean like the rolling-around-crying laughing (🤣).

Getting tagged in Twitter exchanges when you don’t want to be is like standing around awkwardly in an unwelcomed conversation.

Now you can ghost, thanks to “Unmentioning.” Twitter has announced that you can remove yourself from a conversation by clicking on the three dots beside a tweet and following the instructions. Not only will it remove you from the convo, you also won’t receive any notifications or be re-added.

The option is being rolled out across the platform now.

No, really, who asked for the Notes function in our direct messages on Instagram? If you’ve been on the platform recently, you’ve probably seen the new Notes function. According to TechCrunch, Instagram has been experimenting with the tool since June. It allows users to post messages of up to 60 characters to their close friends or followers.

Of course, there have been a lot of feelings about it — mostly wondering why it was introduced instead of what users actually want: a chronological feed.

If you’re a regular reader of the Weekly Download, you know we’ve been covering how TikTok has been leading social media design. Both Instagram and YouTube have copied TikTok with Reels and Shorts.

They’re pretty much the same, but Digiday spoke to a few content creators to find out how they’re populating their content across the platforms and how they’re figuring out the subtle differences.

We don’t want to give it away (the video is less than five minutes), but we’ll give you a hint: Think cross-population.

The James Webb Space Telescope, NASA’s blingiest telescope, just gave us the clearest, sharpest, and deepest image of a small fraction of the universe in the distant past.

Webb’s first deep field is the galaxy cluster SMACS 0723, and it is packed with galaxies, thousands of them. The image that we’re seeing is actually what SMACS 0723 looked like 4.6

billion years ago, and to put it in perspective, the image captured is about the size of “a grain of sand held at arm’s length” compared to the size of the universe.

Makes you consider yourself in relation, doesn’t it?

Pants or no pants… what’s your favourite workout look?