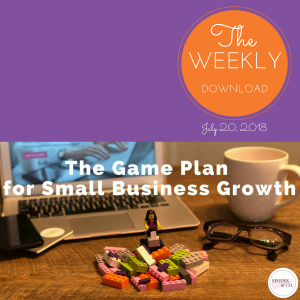 It’s FriYAY; you know what that means… another installment of the Weekly Download! We’ve got some interesting discussions on the agenda. Snapchat’s potential shopping feature, Pinterest’s new collaboration tool, Twitter’s account removal and video ‘dock’ option, Facebook and Instagram’s efforts to eliminate underage users and of course, Friday Fun! Let’s dive right in.

This week we have a gift for you… we launched The Game Plan for Small Business Growth – a private Facebook group for business owners. Membership is free. The group was developed for small business owners and leaders like you who want to increase their sales, generate warm leads and grow their business online without wasting their valuable money or time! Hope to see you there!

Snapchat has been experimenting with a feature called “Eagle.” This app feature has been hidden within Snapchat and only appeared for Android users. Eagle is a visual search tool that will allow users to take photos of a barcode or product, and be redirected to Amazon where you can purchase that item.

To use the Visual Search tool on Snapchat – which activates the Eagle feature – just press and hold down the open camera screen. The feature will suggest an object, song, barcode and more. The information is then filtered and sent to partners like Amazon and Shazam.

Snapchat’s new affiliation with Amazon aims to help the app reclaim its success in the image sharing market. Snapchat took a hit when Instagram launched its Stories feature, more or less copying their content and design ideas. Although Instagram does have a shopping feature, it’s nothing quite like Eagle.

Finally, Pinterest has made planning parties or projects with friends and family easy! On July 11, they launched group boards. This feature allows you to have shared boards and conversations with other users and also features a group activity feed.

The activity feed is a brilliant addition to the group board feature because it allows members of the group to see every pin or changes made. And you can like and comment on the updates. Only group members are privy to the conversations within the groups.

Pinterest, a platform built on the foundation of collaborating and sharing ideas, has furthered their reach with this update. Pinners’ creations and their partnerships will be opening up a whole new world of possibilities.

With Twitter’s latest efforts to improve their data analysis, they’ve decided to remove approximately two million inactive accounts to improve accuracy. As stated by Twitter, “As part of our ongoing and global effort to build trust and encourage healthy conversation on Twitter, every part of the service matters. Follower counts are a visible feature, and we want everyone to have confidence that the numbers are meaningful and accurate.”

The accounts that are being shut down are ones initially created by humans but then taken over and operated by bots. These kinds of bots send out an absurd amount of replies or mentions, and misleading links, etc. Like any other Twitter user, these accounts get locked for their questionable use, and a user can confirm their account by responding to an email from the service.

Many inactive and locked accounts have been floating around in Twitter space until now. Although generally they aren’t bothering anyone, they contribute to inaccurate followings on active accounts. After their removal, most users should only notice a decrease of approximately four followers, but those who have a more substantial audience or accept follows indiscriminately will see much more of an impact.

Twitter’s efforts to improve accuracy will be extremely helpful for accounts using analytics, particularly those held by brands and influencers. The removal of inactive accounts is a step in the right direction. We’re looking forward to seeing the results!

This week we’ll be removing locked Twitter accounts (locked when we detect suspicious changes in behavior) from follower counts across profiles globally. The number of followers displayed on many profiles may go down. #health https://t.co/JGmE4ofoZ2

Calling all social media junkies – Twitter’s new feature update will now let you multi-task your social media consumption! The feature allows you to ‘Dock’ videos playing in your Twitter feed so you can scroll and watch at the same time. The new update allows you to move the video around to a comfortable place on your screen similar to Facebook.

Will you be using this new feature?

Now if you're watching a video on Twitter you'll be able to dock it, so you can keep enjoying your timeline at the same time!

If you're on Android, try it out and let us know what you think! We'll be rolling out this update on iOS soon. pic.twitter.com/rnOqds3YL7

Any Facebook or Instagram user should be 13 or older to have an account. However, the sign-up process has never included a proof of age requirement, making it easy for younger users to slip under the radar and join these platforms.

Facebook recently announced that if they come across any accounts that suggest the user is under the age of 13, the account will be locked, and users will be required to provide proof or age. Upon sufficient proof (i.e. government issued ID) they will be able to reclaim access to their account.

Stranger Things is one of the most binge watched shows on Netflix. It always seems that within 24-hours of each new season release, we are complaining about waiting another six months for the next season. After scouring every social media platform for hints of what’s coming next… we’ve found something, and changes are coming!