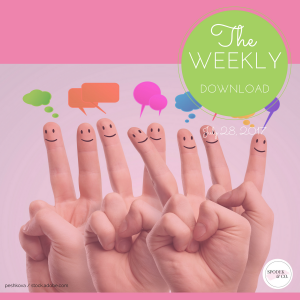 This week we’ve got a lot to cover, so let’s jump right in!

Today we’re chatting about exciting Page updates on Facebook, the status of social in 2017, Instagram comment pods, a sweet royal job opportunity that could be yours and disappointing news south of the border.

And of course, what would a Friday be without some Friday Fun?

Facebook has announced Pages administrators will be able to create their own groups, giving brands and media companies new potential to boost engagement with niche groups.

The new feature will allow brands create their own pages without having to rely on admins to set up groups from their own personal accounts — a welcome change for community managers seeking privacy and separation from work.

The update will also provide businesses with the chance to create “official” groups that unwanted or unofficial third parties and fan clubs can’t set up.

Get your résumé ready – Will and Kate are hiring!

Considering a career change? Now’s your chance to step your game up royally (pun intended).
The royal family is seeking a new senior communications officer for The Households of the Duke and Duchess of Cambridge and HRH Prince Harry of Wales.

The job is said to focus on creating and implementing communications plans for their Royal Foundation and responsibilities also include holding media briefings and doing research for “special projects.”
According to the job posting, qualified applicants should have experience in marketing, media or PR. The ability to “handle sensitive information with tact and discretion at all times” is also a must.

Oy. Just when we thought it couldn’t get any worse…

By now you probably know President Trump announced that the US government would no longer accept or allow transgender individuals to serve in any capacity with the US military – on Twitter!? His logic? The US military must be “focused on victory and cannot be burdened with tremendous medical costs and disruption” that transgender service members cause.

To say there’s been widespread backlash would be seriously understated — from celebs to world leaders, thousands have spoken out against Trump’s appalling news.

In light of these discriminatory comments, the Canadian Forces had a great response regarding the transgender ban – diversity truly is our strength. We couldn’t have said it any better!

The 2017 Social Media Universe in One Infographic

Brian Solis and JESS3 dropped Conversation Prism 5.0 this week — a graphic designed to capture the state of social media visually.

The first iteration of the prism was launched in 2008 as a way to map relevant conversational networks and help viewers better understand and appreciate the state of “the statusphere.”

As shared by Solis, the Conversation Prism demonstrates how the statusphere is evolving so that communicators may play a productive and defining role in shaping how businesses, educational organizations, governments, and everyday people engage, communicate and build mutually-beneficial communities.

Download your copy of Conversation Prism 5.0 – it’s worth a save!

Never heard of an Instagram comment pod? Don’t fret — they’re fairly new and really not that frightening, although they sound a little sci-fi.

Essentially, they’re groups of up to 30 Instagrammers (the platform allows up to 30 in a group chat) that work with each other to comment on each other’s posts on a daily basis.

The idea is to game the Instagram algorithm by increasing engagement. Because of the way the algorithm works, Instagram then “favours” pods, which means influencers in pods appear more often in the Explore tab, leading to higher visibility across the app.

What perturbs advertisers the most is the skew these pods can have on audience and even payment. Says influencer Zach Bussey (and someone I’ve known for several years), “If you had hoped to get your message in front of X number of people, if you subtract other pod members, that number is dramatically reduced.

In fact, the skew can be so dramatic that one indie media buying agency is working to put language in contracts with influencers to disclose if they are part of a pod.
But pod participants beware – it’s not only bad for advertisers. Instagrammers that have left pods say they’ve hurt themselves due to artificially improved and unsustainable numbers.