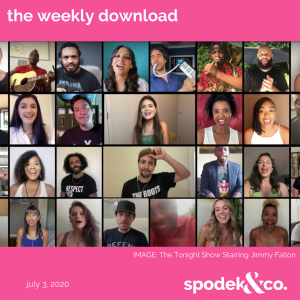 Happy July, and welcome back to another edition of The Weekly Download! Here’s the digital news you might have missed out on this week:

For Friday Fun, we’re sharing a performance of the original Hamilton cast alongside Jimmy Fallon and The Roots, and giving you all the details you need to catch a Broadway show from the comfort of your own home this weekend.

Last week we discussed the ongoing boycott of Facebook ads over concerns that the platform is complicit in promoting racism and misinformation.

All five of Canada’s biggest banks have since joined the international boycott, aligning themselves with other big brands like Unilever, Lululemon and MEC in signing onto the #StopHateForProfit campaign.

The boycott is spearheaded by organizations like the NAACP and the Anti-Defamation League in response to growing anti-Semetic and anti-Black rhetoric frequently found (and unmonitored) on Facebook. It is an important step being taken by big businesses who can afford to do so.

For smaller to medium-sized businesses, cutting out Facebook as an advertising channel isn’t feasible – especially during these times of uncertainty. If our clients need guidance or suggestions on other ways they can take a stand and show support for the #StopHateForProfit campaign, we’re here to help.

And in response to the boycotts, Facebook shared that it will label rule-breaking posts – including those made by President Trump and other notable figures. In the past, Facebook CEO Mark Zuckerberg declined to take action against “unfiltered” statements from political leaders.

According to Zuckerberg, the social network is taking other steps to counter election-related misinformation, particularly when it comes to voting. Users will be directed to authoritative information from state and local election officials in light of misinformation.

It’s a step in the right direction from Facebook, but there is still much work to be done to address the platform’s problems with divisiveness and hate.

The way you watch and find Instagram Stories could be about to change, thanks to Instagram’s latest test of a full-screen Stories display.

Some users will see a prompt below a double-story Stories display to “See all Stories.” When clicked, this will expand to show a full-screen of available Stories – a little overwhelming, but also more convenient than scrolling left endlessly to see what you can watch.

Instagram says the test has been live with a small number of users for a little over a month and hasn’t provided any details yet about when the new design could roll out on a larger scale.

Are you an iOS user that’s been spending a lot more time on TikTok to pass the time during stay-at-home orders? Then you’ll want to pay close attention to this next article.

A copy-paste security issue with iOS means that apps like TikTok have access to copied text or media. TikTok appears to grab clipboard content on a regular basis, even when the app is running in the background. This means the app could have access to your passwords, links, credit card information, or other important data that you’ve copied for easy access on iOS devices.

TikTok maintains that it does not actually get access to this user data, but says that the issue is being fixed. According to the company, the clipboard access issues showed up due to third-party software development kits – particularly one from Google Ads.

Apple says that the introduction of new safeguards in iOS 14 (coming this fall) will help with user security and privacy.

Hamilton is Coming to Disney+ Today!

Have you had a chance to see Hamilton yet? If not, you’re in luck! Starting today, you can watch a performance with the original cast, streaming only on Disney+. The filmed performance wasn’t supposed to hit the big screen until 2021, but the release date was moved up in light of big changes in our world as of late.

Will you be tuning in to watch this weekend?