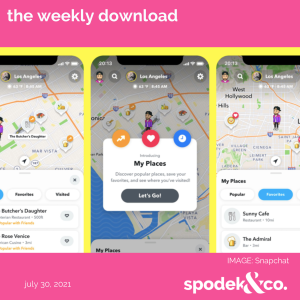 Happy Friday and welcome back to another installment of The Weekly Download, folks!

Before we dive into the long weekend, let’s take a look at the latest updates in the digital world:

Instagram doubles the length of Reels, plus platform’s latest effort to keep youth safer on its app, our founder speaks out about anti-semitism, Snapchat highlights businesses on their maps, Twitter tests out new ecommerce tools, and Friday Fun.

As rates of video production and consumption continue to rise across social media platforms, Instagram has decided to up their Reels from 30 seconds to one minute in length.

It’s no secret that the app is trying to catch up with TikTok – who just increased their own video time limit to 3 minutes – but the expansion for creative time is appreciated nonetheless. Creators who focus on storytelling, cooking, music and more will surely put that extra 30 seconds to good use!

In an effort to create a safer space for Instagram’s youth, the app’s new measures hope to ensure privacy and limit targeted ads.

All accounts issued to those ages 16 and under (and 18 and under in some countries) will automatically be set to private. Private accounts reduce user searchability and help prevent young people from being targeted with “potentially suspicious behaviour” from adults.

Ads will also be limited to only targeting age, gender and location – removing all other specifics until users are 18 (or older in other countries).

Speaking Out About Anti-Semitism

Yesterday, our founder and CEO, Eden Spodek, spoke out about acts of anti-semitism in the City of Toronto after a nearby local, Sam Brody, was attacked.

“I think it’s horrible. I can’t believe this is 2021 and this is happening in Toronto. I’ve lived here most of my life. I’ve lived in a smaller centre where I know what it’s like to really be a minority and be Jewish. It’s very disturbing, distressing. All hate crimes are equally disturbing and distressing.”

The Jewish Canadian community has been vicitm to countless acts of hate and discrimination. We must do better to pull together a community to support and protect the individuals we share our home and lives with. This includes speaking out against and stopping heinous acts of hate.

Put your business on the map!

Snapchat has just announced that Snapchatters can now explore over 30 million businesses on Snap Maps. The new integration is called “My Places” and it allows users to record their favourite local spots as well as receive recommendations.

Snapchat also mentioned that they’ll be working with The Infatuation and Ticketmaster through Snap Maps later this year. Looks like they’re ready to take your food and entertainment to the next level!

Want to check out the cool businesses in your area? Tap the “Places” button found at the bottom of your Snap Map.

Get ready to shop ‘til you drop!

As stated by Twitter on Wednesday, the platform is “launching a pilot of the Shop Module — a feature that allows us to explore how shoppable profiles can create a pathway from talking about and discovering products on Twitter to actually purchasing them.”

Starting with a select group of brands in the U.S., the Shop Module will allow users to scroll and tap through a carousel of products. This new tool allows Twitter users to not only learn more, but also make purchases without having to leave the app.

Let’s wrap things up with some heartwarming content. We couldn’t agree more – women are “so strong!”