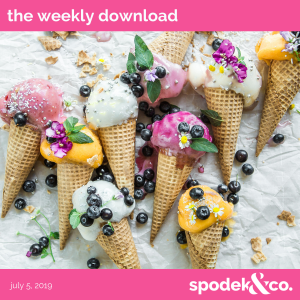 Hello again, and welcome to The Weekly Download! It was a short week, but there was no shortage of news in the digital marketing and tech world — here’s what you might have missed: large scale outages for some of the internet’s biggest players, Kim K’s response to cultural appropriation claims, plus, are email tracking pixels unethical? We finish things off with some Frowny Faces for Friday Fun that are sure to make you smile.

Is it just us, or is this starting to seem like a common occurrence?

On Wednesday, some of our favourite social channels suffered yet another widespread outage. Facebook, Instagram and WhatsApp were down around the world, with a significant concentration in the eastern United States and parts of Europe and South America.

We’re aware that some people are having trouble uploading or sending images and videos on Instagram. We're sorry for the trouble and are working to get things back to normal as quickly as possible. #instagramdown

And speaking of outages, Facebook and co. weren’t the only ones suffering technical difficulties this week.

According to Cloudfare, the software deployment caused a “massive spike in CPU utilization” that was addressed by rolling back the software.

Down Detector and multiple user reports on Twitter reported sites and services like Shopify, Zendesk, Sirius XM, Canva, SoundCloud, BuzzFeed, Pinterest and Dropbox were all experiencing disruptions around the time of the reported outage.

Many people use web services or apps that allow them to track whether their emails have been opened, but a particular service known as “Superhuman” is raising ethical concerns. The pixel tracking service, which costs users $30 a month, goes as far as to track the physical location in which emails were opened and how many times they were read.

A new Vice article dubs these nonconsensual read receipts a “dystopian nightmare” and adds that they’re unethical, invasive, and demonstrate a lack of empathy for the person on the other end of the conversation.

What are your thoughts? Do you think that email tracking pixels that pull these sorts of details cross a boundary between work and personal life? Is the line between tech and privacy ever going to be drawn? Let us know in the comments below.

Last week we reported that Kim Kardashian was under fire online after revealing that her new shapewear brand was called “Kimono”. People were appalled at the choice of moniker, accusing the reality star of cultural appropriation.

In response to the online controversy, Kim announced on Monday that the Solutionwear brand would be launched under a new, still to be determined name.

My brands and products are built with inclusivity and diversity at their core and after careful thought and consideration, I will be launching my Solutionwear brand under a new name. I will be in touch soon. Thank you for your understanding and support always.

The incident is an example of the power of social media and a lesson in brand communications.

Joe Nicchi has had it with influencers.

He’s the owner of CVT Soft Serve in Los Angeles, and he’s tired of self-proclaimed “Instagram influencers” trying to snag free ice cream in exchange for social media posts. Nicchi didn’t take kindly to Instagrammers trying to work a deal for a $4 cone, and even updated company policy to double the price for so-called influencer customers.

We couldn’t care less about how many followers you have, and we’re super embarrassed for you when you tell us.

Nicchi went on to share some sample sponsorship requests he’d received (and rejected), one of which asked him to provide services in exchange for exposure.

The irony? Now Joe is a bit of an influencer himself, striking a chord with many who are tired of the online influencer culture. He’s acquired thousands of new followers as a result of his viral post, and has even seen an uptick in customers at his truck.

Joe says he hopes his story will inspire other small businesses to “hold their own” when it comes to influencer marketing and requests to provide products/services for free in exchange for exposure.

Frowny Faces: Because No One is Happy All the Time

Meet Frowny Faces: individually handcrafted dolls made by Rebecca Floyd born out of desire to teach her son that while there’s nothing wrong with being happy (like most of the dolls we see on shelves today), it’s also okay to feel sad.

Since then, Frowny Faces has amassed thousands of fans on social media, including celebs like Michael J. Fox and Debra Messing (both of whom have been lucky enough to have a Frowny Face created in their likeness).