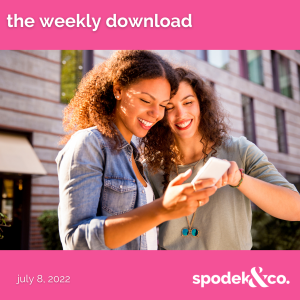 Hello and welcome to the Weekly Download. Hope you had a nice long weekend on both sides of the border.

We are in the heart of summer now, but that doesn’t stop platforms from iterating and providing new opportunities for marketers. This week, you can use Twitter to be an ally, an FCC official wants TikTok gone, Twitter tests collaborative tweets, and Apple bumps up security.

Deadnaming, which is the practice of using the former or birth name of a nonbinary or transgender person, is a microaggression. Yes, mistakes happen, but sometimes deadnaming is used maliciously to hurt a person and make them feel uncomfortable in spaces, including social media.

That’s why Twitter allows you to report a tweet for deadnaming or misgendering a person. When you go through the process, you can select “Attacked because of their identity” as the reason.

If you’ve ever reported a tweet before, you know it takes less than five minutes. Social media can be an unsafe space for many people — doing this small thing could help.

A U.S. Federal Communications Commission member tried to get Apple and Google to remove TikTok from their app stores.

It’s highly unlikely that the request will have the desired result. The FCC doesn’t regulate the app stores; plus, the member, Brendan Carr, is a Republican, and the FCC is controlled by Democrats. Carr called TikTok, which is owned by China-based ByteDance, “a sophisticated surveillance tool that harvests extensive amounts of personal and sensitive data.”

There have been concerns that ByteDance might be selling users’ data to the Chinese government.

Twitter has jumped on the collab platform, following Facebook and Instagram, which followed TikTok. Now users can collaborate on tweets. In the new collaborative tweeting process, which is currently in limited testing, a user can invite another account to contribute to a single tweet.

There are obvious marketing uses for this. Marketers can work with influencers or brand ambassadors, which could exponentially expand their reach as both (or more) collaborators would bring their followers.

Just think: Instead of cc’ing or tagging the original creator, you could work with them IRL.

For a very small number of users, there’s a new Lockdown Mode on Apple iOS. Apple announced the security measure to protect high-profile people who may be targeted by malware developed to hack and steal their data.

It’s early days, but the lockdown mode can be switched on by users. It will severely restrict functions on Apple products such as iPhones, iPads, and Macs, to limit potential entry points for cyberattackers.

Apple is also planning to expand its Security Bounty program, where researchers who find weaknesses in Lockdown Mode (thereby helping the company tighten up the security) could get a financial reward.

Anyone looking for some career change inspiration? We think Abby has the right idea!