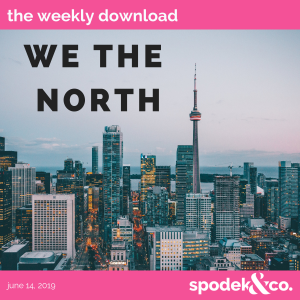 How are we feeling this morning, Canada? After a series filled with late (very late!) night games, and a nail biting, nerve wracking Game 6, the Raptors made HISTORY last night by winning the NBA championship title!

The entire country was LIT UP, the celebrations went on into the wee hours, and Canada can proudly stick another feather in its cap. The Raptors are truly Canada’s team now, and what better way to start the weekend!! That, and of course, The Weekly Download!

Here are the headlines you might have missed this week: Mary Meeker’s 2019 Internet Trends report is revealed, Old Navy does damage control after an alleged racial profiling incident goes viral, Instagram suffers another outage, Ali Stroker makes history at the 2019 Tony Awards, and more awesome Raptors content from Tim Hortons and Jimmy Kimmel.

The 2019 Internet Trends Report is Revealed

Mary Meeker’s Internet Trends report was presented this week during Vox/Recode’s Code Conference. The annual report was first presented by Meeker (also known as the “Queen of the internet”) in 1995 and underlines the most important statistics and technology trends on the web.
Here are some of the key findings in this year’s report:

Want to take a deeper dive into the deck? All 333 slides are available here.

An aggressive local retail worker has been fired after a video showing her accusing a black woman of stealing has gone viral. The videos have been watched over one million times on Facebook alone, and have been shared by high-profile social media accounts like The Shade Room.

I was racially profiled in Old Navy at Square one shopping centre today, I felt uncomfortable so instead of exchanging my merchandise there or buying the white dress I tried on, I decided to go somewhere else, I even went as far as to voice my concern to staff before leaving the store, (which at this point I would’ve understood if she asked about my shirt). Then when I was at Browns looking for shoes, a staff by the name of Stephanie said she seen that I did not walk into the store with my top on, and they saw it on camera, and that I still had the price tag on it, she then proceeded to put her hands on me in front of security guard Quesada 10830909, after getting very irate they advised her to let go, I went back to the store and had to wait, after she already said she previously seen the video. Her manager Gillian Pike than apologized, took my info after approx 15mins and said they would get back to me with the district store manager. Guys I cried cause I never thought in a million years this would happen to me. I would’ve been more calm and understanding if she didn’t accuse me first, and would’ve been happy to show my receipt, especially because I voiced my racial profile complain to the employee before I left the store. This needs to stop, Stephanie had no Right to aggressively lay her hands on me and accuse me of stealing a $13 dollar top, had she not have done that this situation would’ve ended quietly. #OldNavy #OldNavyCanada #Racism #shoppingwhileblack #RacialProfiling #InShock #Angry

Old Navy staff at the location apologized for the employee’s behaviour and later confirmed that she was no longer with the organization. After much public disappointment and concern was shared in response to the video, Old Navy Canada also issued a statement:

“Old Navy was founded to be a place where everyone belongs. It’s been a part of our culture and values since day one, and that makes it even more upsetting when incidents occur that don’t reflect those values.”

This past Sunday, “Oklahoma!” actress Ali Stroker made history at the 73rd annual Tony Awards when she became the first wheelchair user to win a Tony, a huge moment for representation in the disability community.
While the win marked an important milestone, it was also a sad reminder of the lack of accessibility in today’s society. Without a permanent or temporary ramp for stage access, Ali had to wait in the wings backstage in case she won and couldn’t join the rest of the “Oklahoma!” cast and crew onstage when they accepted their “Best Revival of a Musical” award.

So happy Ali Stroker won. Pissed that she had to sit back stage, separated from the audience, because the Tonys wouldn’t build a ramp up to the stage. Accessibility is a non-negotiable human right. #TonyAwards

Instagram faced yet another major outage yesterday afternoon with users around the world reporting problems. A statement released by the company revealed that “technical issues” were to blame.
Many users took to Twitter to complain about the outage using the hashtag #instagramdown — it didn’t take long for it to become the #1 trending topic worldwide.
While outages can’t always be prevented and happen now and then in the world of tech, it seems like Instagram has had a bit of an unlucky streak as of late. Tell us—does the unpredictability of the app bother you, or does it provide you with a bit of welcome downtime?

As we mentioned at the top, the whole country has been abuzz with Raptors mania! Tim Hortons did a masterful job capitalizing on that NBA Championship excitement and has released a new digital ad featuring Raptors superfan Nav Bhatia.

Let’s just say the ad is making us feel super proud to be Canadian (and a little teary, too!)

“I hope people see why Canada is so special.” @Raptors Superfan Nav Bhatia makes us proud to be Canadian. #WeTheNorth #ThisIsCanada pic.twitter.com/WtamLPZVZH

Jimmy Kimmel is at it again with the NBA Championship content! This video is too good not to include in this week’s Friday Fun.