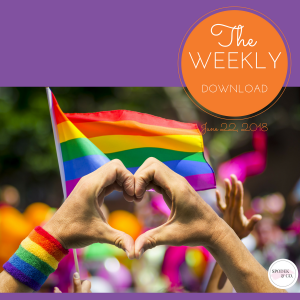 Yesterday we celebrated Indigenous Peoples Day in Canada. The day was filled with storytelling, traditional dances, festivals, singing, pow-wows and other tributes to heritage. The Indigenous culture is made up of a strong, spirited, bright and brave community of people.

If you followed the hashtag #NIPDCanada yesterday, you would have been privy to some absolutely stunning and moving tributes to Indigenous heritage and the culture. Here are a couple of our favourite posts.

We want to know, what does National Indigenous Peoples Day mean to you? #NIPDCanada

On Wednesday, Instagram made an exciting announcement. Along with reaching one billion users, they announced their “most exciting feature to date: IGTV, a new app for watching long-form, vertical video from your favourite Instagram creators.”

IGTV is unique because specifically designed to be played on phones with its design for vertical play – almost like Vine with longer videos or a mashup of YouTube and Instagram Stories. IGTV is an added feature within Instagram that once opened, video starts playing. IGTV picks its content channels for you based on your interests on Instagram and generates content for you, making it easy!

From our CEO @kevin: “Today, we have two big announcements to share. First, Instagram is now a global community of one billion! Since our launch in 2010, we’ve watched with amazement as the community has flourished and grown. This is a major accomplishment — so from all of us at Instagram, thank you! Second, we’re announcing our most exciting feature to date: IGTV, a new app for watching long-form, vertical video from your favorite Instagram creators, like LaurDIY (@laurdiy) posting her newest project or King Bach (@kingbach) sharing his latest comedy skit. While there’s a stand-alone IGTV app, you’ll also be able to watch from within the Instagram app so the entire community of one billion can use it from the very start. IGTV is different in a few ways. First, it’s built for how you actually use your phone, so videos are full screen and vertical. Also, unlike on Instagram, videos aren’t limited to one minute. Instead, each video can be up to an hour long. We made it simple, too. Just like turning on the TV, IGTV starts playing as soon as you open the app. You don’t have to search to start watching content from people you already follow on Instagram and others you might like based on your interests. You can swipe up to discover more — switch between “For You,” “Following,” “Popular” and “Continue Watching.” You can also like, comment and send videos to friends in Direct. Also like TV, IGTV has channels. But, in IGTV, the creators are the channels. When you follow a creator on Instagram, their IGTV channel will show up for you to watch. Anyone can be a creator — you can upload your own IGTV videos in the app or on the web to start your own channel. Instagram has always been a place to connect with the people who inspire, educate and entertain you every day. With your help, IGTV begins a new chapter of video on Instagram. We hope it brings you closer to the people and things you love. IGTV will be rolling out globally over the next few weeks on iOS and Android.

It’s Pride Month and people are celebrating all over social media! Pride is a special time for many individuals to express themselves and for others to show their support. Social media is a stage for people to broadcast their celebrations while connecting with others all over the globe.

Facebook, Messenger and Instagram have added features to help users express their pride and support. Facebook has made posting text, photos and videos open to pride personalization with backgrounds, masks, locations stickers and other effects available during pride month. Messenger uses similar customizations.

However, Instagram takes the cake for their LGBTQ features. The customization mirrors both Facebook and Messenger… except for with rainbow hashtags and superior posting. Hashtagging words and terms such as #pride and #loveislove, can be found lit up in every colour. Not only does it look awesome, but when you follow those hashtags you’ll discover some really inspiring content.

Welcome to my #nycpride lounge where every guest is a princess 👸🏻 🌈 Take a seat — we’re gonna lock the doors, lower the blinds, fire up the smoke machine and put on some heels, cause I know exactly what we need… 👠

Snapchat appeals to many of their users for its self-deleting photos and messages. Now, Snapchat als lets you delete sent messages before the recipient opens them. What a relief for those who type faster than they think! Clear Chats is a feature unlike any other on social media. Snapchat is empowering their users by allowing them to have more control of the content they are sending out.

The world paused for a hot minute when Queen Bey and Mr. Carter surprised dropped an album on Saturday. Their featured video APES**T is nothing short of divine. We’re still puzzled how the Carter’s were able to film in the Louvre without having any leaks on the internet.

We would to wish everyone a happy pride weekend! If you’re celebrating, we hope you have as much fun as this guy.