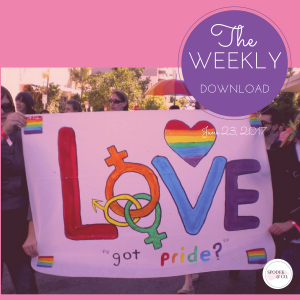 Are you taking a summer vacation? How do you manage time off from work? I’m looking forward to vacation both with family and friends over the next couple of months.

As a business owner, it’s not always easy to sneak in that downtime, yet it’s much-needed. Even just a few days off can bring about mental clarity and a refreshed outlook that is re-energizing and beneficial to the business. It also helps that I have a wonderful team in place ensure work is handled in my absence.

It’s time to recap everything you might have missed this week. We’re talking about a new vision at Facebook, Pridemojis, Twitter’s new makeover, how Google is making job searching easier, Instagram’s continued growth, the big news in Uber-land, a new edition of Ada’s Sisters, and so much more. Let’s get to it!

While a lot of the details are still unclear, it’s hoped that the change in leadership will be a refreshing step forward for Uber. This year, Uber has been in the spotlight for its less-than-ideal corporate culture that included discrimination and sexual harassment.

Shared in a public statement, Kalanick said, “I love Uber more than anything in the world and at this difficult moment in my personal life I have accepted the investors’ request to step aside so that Uber can go back to building rather than be distracted with another fight.” Do you use Uber? How has their corporate culture impacted your use of the service?

Yesterday, in stark contrast to the former leadership style at Uber, at the first “Facebook Communities Summit” and simulcast on Facebook Live, CEO Mark Zuckerberg announced that the company’s guiding vision moving forward will be “to bring the world closer together.” As a part of achieving this goal, several new Group features were announced. If you don’t currently use a Facebook Group for your organization, it may be time to reconsider.

And in addition to their new vision and enhancing groups, Facebook’s chat bots are getting more human

How are they doing it? Facebook showed them negotiation dialogues between real people, then trained the bots to imitate the actions through a process called supervised learning.

Just how successful was the training? According to Facebook, humans participating in the study didn’t realize they were talking to a bot.

So, what do you think: cool or creepy?

Pride month is here, and Twitter celebrated by introducing a revamped heart emoji — or Pridemoji – for the occasion.

The Pridemoji will also accompany variations of these hashtags in several languages, including Spanish, Arabic, Portuguese, French, Russian, and Chinese. Facebook has also added a Pridemoji reaction that you can use when reacting to posts during Pride month. Unfortunately, it’s not available for everyone.

Tube stations, bus stops and hire bikes in London are being decorated for the #PrideFestival #PrideInLondon #LoveIsLove 🙌🏼🌈 pic.twitter.com/cClbfffAMl

This week, Google launched a new job search feature that allows users to search across major online job boards like LinkedIn, Monster and more. Available to users on desktop and mobile, the new search feature will also include job listings found on a company’s homepage.

But Google’s made it clear they’re not looking to step on anyone’s toes. The search engine giant currently has no plans to let employers post jobs directly to the search engine. “We want to do what we do best: search,” said Nick Zakrasek, Google’s product manager for this project.

You might have already noticed Twitter’s looking a little different these days.

Last week the social network announced that the new, refreshed look is the result of user feedback and ideas. The update is meant to make things feel lighter, faster, and easier to use. Additional accessibility options are also part of the app’s refresh.

Check out Twitter’s blog post for a list of all the new features they’ve incorporated in the update.

YouTube’s latest announcement sounds like something straight from the future.

Last week, YouTube introduced heatmap data for 360-degree and VR videos with over 1,000 views.
The new feature will give creators insight into how viewers are engaging with their VR content. Powered by heatmaps, creators will be able to see exactly what parts of a video are catching a viewer’s attention, and how long they’re looking at it.

Some of YouTube’s early findings show that most viewers spend 75% of their time watching a 360-degree video staring at the front 90 degrees, and that the more engaging the full scene is, the more likely viewers will want to explore the full 360-degree view.

So, Instagram continues to surpass Snapchat with 250M daily active users! And now to make Stories even sweeter, after you create an Instagram Live video, you have the option to have to replay your video for 24 hours.

Did you hear Google announced that it would be too expensive to actually equalize salaries across genders, and that panel at the Hall of Femme event that was ALL men and mansplained the heck out of the topic?

We’ll tell you about a good news/bad news story with a Calgary twitter account that secretly filmed women but was shut down thanks to some good social media Samaritan.

Wonder Woman continues to blow the box office out of the water, but the sponsors continue to disappoint us with diet pills and cleaning products. No, we’re not kidding. Thankfully, the first Google story we have for you this week is their Wonder Woman coding game. It’s awesome.

Less awesome is Google’s claim that it would be too expensive to actually pay the women that work for them the same as they pay the men.