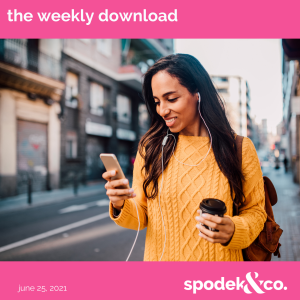 Welcome back and Happy Friday! It’s time for another edition of The Weekly Download.

Apple’s New Email Privacy: The Facts You Need to Know

After Apple’s Privacy Protection announcement two weeks ago, many business owners and marketers alike have questioned what the impact will be on email marketing efforts.

Apple’s fall update to iOS 15 and macOS Monterey will come with a feature that will no longer enable senders to extract information from tracking pixels inserted into their emails. According to Apple’s PR team, “The new feature helps users prevent senders from knowing when [users] open an email, and masks their IP address so it can’t be linked to other online activity or used to determine their location.”

There’s a wide range of opinions regarding whether the outcome will ultimately be positive or negative for email marketers, but there are a few steps that you can take in the meantime to prepare for the update before it drops, as expertly summarized here:

We’ll be keeping a close eye on the update as information continues to evolve and will be helping all our clients prep as well as mitigate any unwanted outcomes.

But, there’s a catch.

Big news. Starting today, you can apply to be one of the first to try Ticketed Spaces and Super Follows with your audience. pic.twitter.com/nwtD7dmY7I

According to Mashable, Twitter will also benefit from the new programs. The company will take at least 3 percent (after fees) up to $50,000. Creators may earn “up to 80% of revenue after in-app purchase fees” — which sounds like Twitter will take a minimum cut of 20 percent.

Last year, Instagram added algorithmic suggestions to the bottom of the app to grab a user’s attention when they reached the bottom of their feed. Now, in a new test, the company is sprinkling “Suggested Posts” from accounts not followed by a user into their feed directly alongside those they do.

Instagram is also testing new controls that will allow users to add specific topics as an interest for their suggested posts, as well as an option that gives users the ability to “snooze” the new feature if they wish, removing it from their feed for 30 days.

For now, the test will roll out to a small number of users in English-speaking countries only.

How do you feel about seeing Suggested Posts in your feed before the content from accounts that you’ve actually chosen to follow?

In honor of the company’s first-ever YouTube Small Biz Day as part of its International Small Business Week, Google is launching a simplified ad creation workflow for video ads on YouTube. The new workflow will allow advertisers to launch a campaign by simply adding a video, selecting the audiences they want to reach and designating a budget.

The new workflow makes things more streamlined and less overwhelming for small or medium business owners or advertisers who may have previously found the process intimidating.

Along with the new ad creation workflow, which is available on both desktop and mobile, Google is launching a simplified metrics dashboard to help gauge campaign performance and adjust strategy.

This Instagram Reel is guaranteed to get your weekend started off on the right foot!