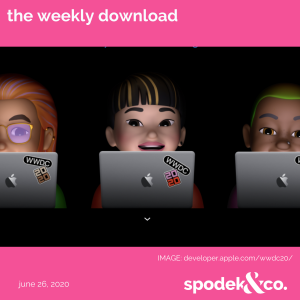 Happy Friday and welcome back! It’s time for The Weekly Download.

Could a Facebook Ad Boycott be on the Horizon?

A Facebook ad boycott and potential consequences are generating discussion after a number of major apparel brands agreed to pull advertising dollars from the platform. The coordinated campaign, known as “Stop Hate for Profit”, is an attempt to pressure Facebook to crack down on hate speech and misinformation ahead of the 2020 U.S. presidential election.

The campaign, launched by civil rights groups like the NAACP, Anti-Defamation League, and Color of Change, asks marketers to boycott Facebook ads during the month of July. Some larger companies, including The North Face, Ben & Jerry’s, Patagonia, and Upwork Inc., have already pledged their support and confirmed that all Facebook advertising will be paused until August.

This is an important step being taken by big business. Facebook needs to be held accountable for their actions. Remember that for the larger brands, Facebook makes up only a small percentage of their ad budgets and not using the social media platform for a month may result in lost profits but not losing their businesses.

We must also remember that most smaller to medium-sized businesses are in survival mode right now. Cutting out an important marketing channel – and in many cases the only or most effective one – may result in their demise.

Each of our clients’ have unique needs so we will not take a one-size-fits-all approach but rather provide any guidance they request and/or suggest other ways for them to take a position if that’s how they’d like to proceed.

There are tons of new updates coming to Apple devices with the introduction of iOS 14 and the next build of macOS (called Big Sur), including new widgets for app libraries, picture-in-picture, the ability to pin important conversations on iMessage, sleep tracking for Apple Watch (and handwashing detection!), and much more.

Check out highlights from the keynote in full here.

Instagram is making even more moves to keep eCommerce at the forefront of its user interface. After recently launching Shops, the company is unveiling a new tool to help users shop on the platform, known as shopping tags.

Shopping tags will allow users to add product tags to their image/video captions, which, when tapped, take you through to a shoppable product page. It’s another way for businesses to promote products and make the eCommerce process easy for Instagram users.

The new feature is limited to a small group of accounts located in the US that have access to the app’s Checkout function, but may become more accessible once Instagram rolls out Shops more widely.

Another big social media player is taking aim at TikTok. YouTube announced on Wednesday that it is beginning to test a new feature on mobile that will allow users to record 15-second long multi-segment videos.

iOS and Android users included in the test will see an option to “create a video” in the mobile upload flow. Similar to TikTok, the user can then hold and release the record button repeatedly to film a series of clips up to 15 seconds long. YouTube will combine the clips and upload it as one single video.

Other social media giants like Instagram have also recently introduced new features in hopes of emulating TikTok’s major popularity, but so far, none have been quite as successful.

Looking for a new beauty guru to follow who’s equal parts sweet and sassy? Check out the cutest makeup tutorial from Jayde Kamille, Mini InfluenceHER, that’s been making the rounds on social media.

Ever wondered what a show about your favourite comedians in space might be like? Then you’ll definitely want to watch this deepfake video from Brian Monarch: