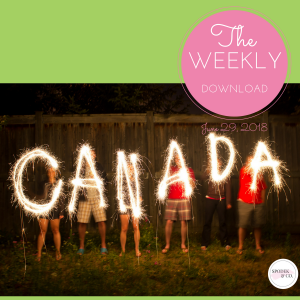 Happy Friday, everyone. We’ve got another great weekend ahead of us – this time it’s extended for Canada Day! On the docket this week we are discussing Pinterest’s collaboration with FabFitFun, Facebook fact-checkers, fake influencers, The Red Hen D.C.’s PR, Google AdWords’ rebrand and Instagram’s new Video Chat with some Friday Fun!

One of our favourite social media platforms is collaborating with a physical service in a unique and original manner. Pinterest and FabFitFun have partnered in the creation of a Pinterest Box. The box is valued at US$49.99 and features nine products that can be found trending on the Pinterest 100 report. Pinterest is on-brand with FabFitFun’s mission and the collaboration is destined for popularity.

Pinterest and FabFitFun predict the launch of the Pinterest Box will be hugely successful. Should the data agree, it’s likely they will make it a reoccurring release included in annual memberships.

"Imagine your favorite Pinterest boards coming to life and being delivered to your front door — that's the Pinterest 100 Box." via @redbookmag https://t.co/WjSbRIX3co

The guard against “fake-news” continues. Facebook Canada has contracted fact-checkers to filter through news and blog content on their social platform. Their efforts are to aid against the distribution of falsified information amongst their users. Facebook’s debunking of stories on a more substantial scale also means they will be taking action against offenders.

In an age of influencers, we’ve got two types: human and robotic. These computer simulated individuals have been making their followers question the living from the pixelated. Some brands are choosing to use these Instagram influencers created with CGI, with millions of followers, to promote their products.

Lil Miquela, for example, collaborates certain brands or individuals and is posting about their products or services. Pixelated Instagram identities who cannot form opinions or conclusions are influencing social media users worldwide. Industry leaders are questioning the integrity of brands who chose these simulated influencers. Isn’t social media and influencer relations about building human relationships? What do you think about adding “fake” people into the mix?

By now you probably know the story about Sarah Huckabee Sanders, White House Press Secretary being asked to leave The Red Hen restaurant in Virginia. This was a political decision made by the independently operated location’s owner. However, many unaffiliated The Red Hen locations across the United States (even one located closer to Spodek & Co.’s home in Collingwood, Ontario), were associated with the Virginia location’s political stand. Although there were mixed views depending on which side of the political climate you sit, business at The Red Hen chain in general was gangbusters!

But what happens when a corporation is franchised when there’s a problem at one of their locations? And what do you do when your unaffiliated business is under the attack (or applauded) for someone else’s actions? Red Hen D.C. found itself in the middle of the spotlight. Here is a frustrating series of tweets from their PR manager who survived the storm:

Good morning! @PressSec went to the unaffiliated @RedHenLex last night, not to our DC-based restaurant.

You have the wrong restaurant. Separate companies separate businesses separate owners no affiliation. That one is in Virginia. Businesses in DC are prohibited from discriminating against people for political affiliation because we are a federal district.

It’s not a franchise. That’s what unaffiliated means. pic.twitter.com/jVBArm8Kvp

While Google had been busy acquiring ad products over the past few years, customers were becoming confused so in an effort to simply their offerings, starting in July Google will start rolling out their advertising and measurement platforms under three new brands with Google AdWords becoming part of Google Ads, Google Marketing Platform and Google Ad Manager.

On June 26, 2018, Instagram announced that you can now Video Chat with friends on their platform. When visiting Instagram Direct you’ll see the “start a video chat” component in the top right-hand corner of a chat. The feature allows you to share these real-time video experiences with up to three friends. Video Chat is available across all iOS and Android devices and can be used without a phone number.

Today we’re launching two new features to bring you even closer to the people and things you love: video chat and topic channels on Explore. You can now video chat in Instagram Direct, either with just one person or a group. While on the chat, you can minimize the video and keep enjoying Instagram. With topic channels on Explore, we’re giving you new ways to discover your interests on Instagram. Now it’s even easier to browse through posts you want to see and accounts you want to follow.

Everybody loves James Corden… Almost as much as they love The Beatles. It’s about time James welcomed Paul McCartney onto his show for some carpool karaoke!

A little something from us Canucks to our friends south of the border as we head into Canada Day weekend.