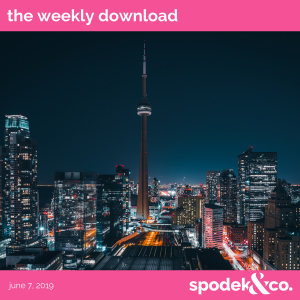 Welcome back for another installment of The Weekly Download!
Here’s what we’re chatting about today: Apple’s WWDC 2019, the Obamas’ new podcast, and is your passcode as safe as you think it is? Then we’re wrapping things up with some Raptors-inspired Friday Fun.

This week marked Apple’s Worldwide Developers Conference. Lots of updates were unveiled, including the new Mac Pro (starting at a hefty $5,999 USD), iOS13 complete with cycle tracking (seriously) and dark mode, and Sidecar — the ability to use your iPad as a wireless second screen for your Mac.

New Research Shows Passcodes Could be Compromised Through Microphones

Think your phone data is safe because you’ve hidden it behind the security of a passcode?

Academic researchers have found a new way to determine passcodes used on phones and tablets through microphones embedded in most handheld devices. These microphones can detect sound waves generated by users when tapping in a passcode on a screen.

While the technique isn’t totally foolproof, researchers were able to guess a passcode more than half the time using machine learning.

The Obamas are Launching a Podcast with Spotify

Barack and Michelle Obama are jumping aboard the podcast train. This week they announced they’ll be publishing their podcast, Higher Ground Audio, exclusively with Spotify based on a multi-year deal.

“We’ve always believed in the value of entertaining, thought-provoking conversation,” said the former US president. “It helps us build connections with each other and open ourselves up to new ideas.”
First Netflix, now Spotify… What’s next for the Obamas?!

Tonight marks game 4 of the history-making Raptors/Warriors NBA Finals, and it’s the only thing we’re seeing on our timelines these days. In honour of our home team — Canada’s team, really — we’re putting a Raptors twist on Friday Fun today.