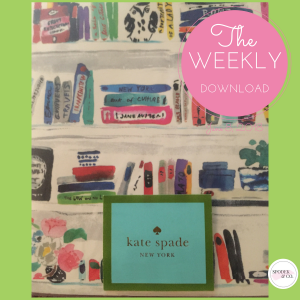 It’s Friday! After a chilly week here in Toronto we’re ready to turn up the heat this weekend. This week’s Weekly Download is a discussion of Kate Spade, Facebook’s efforts to eliminate the distribution of personal photos, Instagram’s algorithms and some Friday Fun.

Tuesday, we lost world-renowned designer, Kate Spade. Kate’s unexpected suicide has sparked a meaningful and complex dialogue across social networks. Mental health can be a difficult topic to address appropriately and mindfully. Users have been responding on Twitter and Instagram to the news with great compassion as well as sharing stories of their mental health journeys.

#KateSpade with a net worth of 200 million. A 13 year old daughter. took her own life today. Just goes to show you people who are suffering may seem to have it all. Yet feel they have nothing. Reach out to a friend. Send that “ how are you “ text. Just reach out.

“She leaves a little sparkle wherever she goes.” – Kate Spade ✨ #RestInPeace #KateSpade

Recognized artist, Kyra Kendall, posted on her Instagram that she would be selling Kate inspired illustrations and will donate all proceeds to a suicide prevention hotline.

I feel so bad about the Kate Spade news. So I’ve decided to try and do something. If you buy one of these original Kate silhouette paintings ( I made 25 that all look just like this — SOLD OUT. 🖤) I will give all the proceeds to the suicide prevention hotline. Kate Spade wrote the first entertaining book I ever read. I loved the little watercolor illustrations and I had the courage to throw my first dinner party thanks to her style advice. #katespade #sad

Kate’s husband shared a very heartfelt statement with The New York Times outlining his marriage, Kate’s depression and their daughter.

The ability to report a photo has proven to be insufficient for such serious cases of posting abuse. Together, Facebook and many other international partnerships have worked together to develop a safety process. These efforts are more specifically to protect women as they are twice as likely to be targeted and has affected girls as young as 14 years of age.

As told by Facebook:
“People who worry that someone might want to harm them by sharing an intimate image can proactively upload it so we can block anyone else from sharing it on Facebook, Instagram, or Messenger:
– Anyone who fears an intimate image of them may be public can contact one of our partners to submit a form
– After submitting the form, the victim receives an email containing a secure, one-time upload link
– The victim can use the link to upload images they fear will be shared
– One of a handful of specifically trained members of our Community Operations Safety Team will review the report and create a unique fingerprint, or hash, that allows us to identify future uploads of the images without keeping copies of them on our servers
– Once we create these hashes, we notify the victim via email and delete the images from our servers – no later than seven days
– We store the hashes so any time someone tries to upload an image with the same fingerprint, we can block it from appearing on Facebook, Instagram or Messenger”

We’ve heard a lot about Instagram’s feed algorithms this year. In efforts to educate their 800-million and counting users, Instagram invited a group of reporters to sit in on an informative presentation to provide clarity.
Instagram was strategic in their new format, making sure that user is seeing 90 per cent of their friends’ posts which leads to them spending more time on the app as a whole according to Tech Crunch.

Post-configuration, there is a three-part ranking system.

This algorithmic knowledge brings us back to the basics – post engaging content. Not only will it be at the top of all of your follower’s feeds, but it will be on explore pages or suggested to others.

A STAR IS BORN – Official Trailer 1

Bradley Cooper stars in his first major film as director and he sings too. But that’s not all, Lady Gaga, looking much more like Stefani Joanne Angelina Germanotta than her alterego, co-stars. Could new careers be in store for these two?