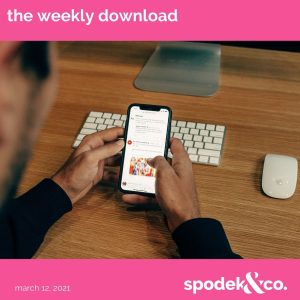 Welcome back to The Weekly Download! Here’s what made headlines this week:

Mark Cuban’s podcasting platform, Fireside, a widespread release date for Twitter Spaces and an ‘undo’  tweet button in the works, new features rolling out at Facebook, and some royally good Friday Fun.

Fireside is a new app from Mark Cuban and Falon Fatemi, which promises to deliver a “next-gen podcast platform.” Although the app is currently in beta on iOS with a limited number of testers, chats are visible to anyone (non-users included!) through a browser, giving a sense of what Fireside is all about.

According to The Verge, the app is best described as a hybrid between Spotify’s Anchor software and Clubhouse. Although Fireside prioritizes live conversation, it tries to make informal conversations sound more professional. Unlike Clubhouse, Fireside encourages more audience participation by allowing users to react to conversations or type comments and questions.

If you haven’t been paying attention to social audio yet, what are you waiting for? Get the rundown in our latest blog.

And speaking of social audio, Twitter has some news to share this week: the company is planning to roll out Twitter Spaces, the platform’s Clubhouse competitor, to all users starting in April.

While anyone can join an existing Spaces room right now, only a small group of Twitter users have been able to host one. Clubhouse is currently only open to those with invites.

letting you enter your usernames on Bandcamp, Cash App, Patreon, PayPal and Venmo, allowing people to tip you directly there pic.twitter.com/xhCxCTjWnO

Another new feature is Twitter’s “Tip Jar” option, a way for Spaces creators to monetize their broadcasts on the platform. Clubhouse has yet to introduce a similar program for creators.

Facebook is expanding its monetization options for video creators, and that means more ads.

Creators will now be able to include in-stream ads in videos as short as one minute — those ads will usually play after 30 seconds of a shorter video.

Facebook will split ad revenue with the video creators, who can participate if they have 600,000 minutes of viewing time across all videos over the last 60 days and five or more active or Live videos.

Here’s what Facebook had to say about the test:

“…We’re testing the ability for Instagram creators to choose to have their Reels recommended on Facebook… creators can reach new audiences and people can create and discover more entertaining content.”

The company hopes the new functionality, which is currently only being tested in India, will encourage creators to share on their platforms to increase their reach and engagement. The new easy sharing option is another way Facebook plans to entice creators to use Reels, drawing attention away from TikTok.

It’s not an ‘edit’ button, but it’s a decent alternative…

Twitter is reportedly testing a new feature that will allow users to scrap tweets with an ‘undo send’ timer.

Twitter is working on “Undo Send” timer for tweets pic.twitter.com/nS0kuijPK0

Discovered by notable reverse-engineer Jane Manchun Wong, the new option would enable users to recall tweets within a 5-second window, which could be enough time to quickly check and catch any errors before sharing.

Would you be happy to see an ‘undo’ button in your Twitter feed?

Meghan Markle and Prince Harry made lots of headlines this week following their tell-all interview with Oprah Winfrey, but why isn’t anyone talking more about this hilarious interview Harry did with James Corden on The Late Late Show? It’s worth a watch, trust us!