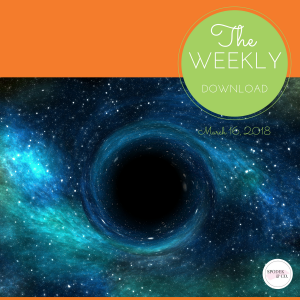 The loss of a respected icon, Google’s ban against cryptocurrency, a new bot on the block, YouTube’s effort to fight conspiracy theories, and exploring new cities like your favourite pup would. It’s time to kick off your Friday right with The Weekly Download!

After the death of physicist Stephen Hawking was announced on March 14, scientists, celebrities and many more took to Twitter to share their thoughts.

His passing has left an intellectual vacuum in his wake. But it's not empty. Think of it as a kind of vacuum energy permeating the fabric of spacetime that defies measure. Stephen Hawking, RIP 1942-2018. pic.twitter.com/nAanMySqkt

Genius is so fine and rare. Goodbye Professor Hawking. You inspired and taught us all. pic.twitter.com/9Drdnv2eEe

Dr. Hawking is best known for his discovery that black holes emit radiation detectable by special instrumentation. His discovery has made the detailed study of black holes possible.

A couple of weeks ago, we chatted about Facebook’s move to ban cryptocurrency advertising from the platform. This week, Google announced their plans to follow suit. Starting in June, cryptocurrency promotions will be banned as part of an effort to clear unregulated financial products off its platform.

While the announcement did not explain why advertising digital currencies may be harmful, Google mentioned improving the ads experience across the web is a top priority for the tech giant.

Google said it would also ban ads for some other risky financial products, like binary options, which offer investors all-or-nothing returns.

It’s all about the bots! This week, Quartz announced their latest product at SXSW – a conversational chatbot for Facebook Messenger that delivers news and other personalized content.

The new tool won’t just deliver the news, but also send stories that go deep into a topic, learn when to best notify you and share “projects” like new recipes to try. Cool, right?

Quartz says that over time, they’ll start to use machine learning to figure out what time a person uses the product and for how long to determine when they actually like to read their news. It will also try not to serve you the same content more than once.

And speaking of Facebook Messenger news, this week Messenger Platform 2.3 was released. The new updates boast tools to make customer interactions easier, including new metrics in Messaging Insights, customer chat plugin customization and new message tags. Facebook says the update will not only make Messenger more impactful for business, but also allow people to connect with them in a way that is more intuitive and enjoyable.

More Reddit updates are being released as the company aims to mature their platform with user-centric features. Next week, Reddit will launch native promoted post ads on its Reddit iOS app with an Android version to be released at a later date.
According to TechCrunch, while the apps have had rocky starts they’ve proven to offer a vastly improved user experience over what came before it.
Although some may be hesitant to get involved with a “controversial” platform, native promoted ads represent a big step towards building a better ads product for advertisers.

YouTube to link directly to Wikipedia to fight conspiracy theories

In an effort to combat fake news, YouTube has announced it will directly link to Wikipedia to fight conspiracy theories and provide the most factual information possible to viewers. Until now, the company hasn’t said much about how it plans to combat the spread of misinformation.
The new feature, called ‘information cues’, will work like this: If you search and click on a conspiracy theory video about, say, chemtrails, YouTube will now link to a Wikipedia page that debunks the hoax alongside the video.
External linking within the platform is a big move for YouTube, which has historically existed as a mostly contained ecosystem.
While merely serving up factual information isn’t likely to solve the problem once and for all, it’s a step in the right direction. An obvious question here is whether Wikipedia and YouTube will be able to keep up with with breaking news and conspiracy theories.

Explore a new city like your favourite puppy would
We’re used to checking out Google Street View from an eye-level perspective, but a new update from Google Japan is letting people explore cities via “dog view”. To capture the unique perspective, cameras were strapped on the backs of two very good boys, Ako and Asuka.
In “dog view,” you can also check out Japan’s open-air footbath and the Akita dog museum. Click for a list of the other places you can check out, all from a dog’s point of view, of course.
Jeff Goldblum reads hilarious thirst tweets
The headline says it all. Click below for the LOLs.

Michael J. Fox takes in a Leafs’ game while filming in TO