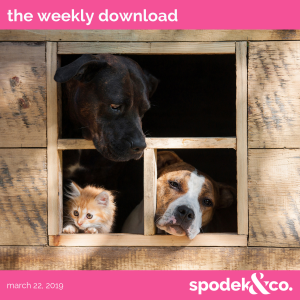 It’s time yet again for your favourite Friday roundup – The Weekly Download.

And of course, we’re topping it all off with some Friday Fun!

It’s news you’re probably not shocked to hear, but a recent survey commissioned by Business Insider confirmed that Instagram, not Facebook, is the app of choice for 18 to 25-year olds.

Facebook used to be the social network of choice for teens and young adults, so why the change in popularity? Too many grown-ups (read:parents) on the site has been an issue for kids. And lack of privacy on Facebook was another big one. With young people, no matter the decade or technology at hand, some things just never change. 😉

The news comes around the same time that cybersecurity writer Brian Krebs reported Facebook password vulnerability. According to the report, an audit by Facebook found that hundreds of millions of user passwords dating back to 2012 were stored in plain text, making them readable to the company’s excess of 20,000 employees.

While Facebook says they have found no evidence of abuse and are not currently requiring users to change their passwords, you should probably do it anyway.

We wrote recently about the rise of “social commerce” and why you should care, and this is exactly what we were talking about! Instagram’s new shopping checkout allows buyers to make purchases within the app using previously stored payment info.

Instagram Checkout launched in the US this week with 20 top brands, including Zara, H&M, and Warby Parker.

The feature marks a new revenue stream for the photo-sharing giant, with the introduction of a “selling fee” to offset transaction-related expenses, and fund programs and products that help make Checkout possible.
At this time, Instagram has not disclosed the cost of the fee charged to participating merchants.

Google is finally jumping into the billion-dollar market of video games.

Announced this week, to the joy of many gamers, Google Stadia will be a browser-based video game streaming service that will capitalize on the company’s cloud technology and global network of data centres. The technology will allow users to play games without having to wait for download and will potentially make access to games as easy as watching a video on YouTube.

A lot of the details are still unavailable, including timing, pricing and available titles. Stadia will launch sometime this year in the US, Canada and much of Europe and will support desktops, laptops, tablets, phones, and TVs connected to Chromecast.

Google is also finalizing a Wi-Fi enabled controller for Stadia that will launch alongside the service this year.

Apple’s AirPods Get a Refresh

I for one am super excited about this latest Apple news! Probably my most favourite technology, Apple AirPods are getting a makeover!

I literally use my AirPods all day long. Dear Apple: Take my money!

Rogers Media struck a deal with St. Joseph Communications this week, getting out of the magazine business for good. The media giant has sold all of its remaining magazine brands to St Joseph’s media, one of Canada’s biggest privately owned print, media and communications companies, for an undisclosed sum.

The sale includes Canadian print favourites like Maclean’s, Chatelaine, and HELLO! Canada, as well as digital publications such as FLARE and Canadian Business.

And it’s good news for current Rogers Media Publishing employees, who will be offered employment through the deal, expected to close in April 2019.

A Cat and Two Dogs Took Control of a Brooklyn, NY Building
New York City can be tough and finding accommodations even tougher! Which is probably why this hilarious Twitter thread, about a cat and two dogs who took over a Brooklyn apartment building, is so worth the read. For any worried animal lovers, it was determined that the roaming gang is well loved and has owners in the building. They’re just smarter than your average cat/dog trio!

**NOTE: Since the writing of this piece, there’s been an update – the cat came back AGAIN! LOL

The Toys Are Back!

Your favourite animated toys won’t be in theatres until this June, but they already have people crying. Watch the new trailer for Toy Story 4 below.

On the road of life there are old friends, new friends, and stories that change you. #ToyStory4 pic.twitter.com/GNZMD67krq