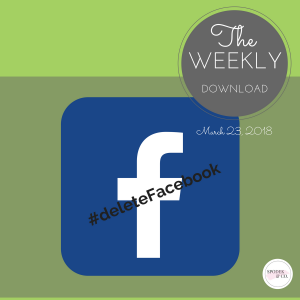 According to our calendars, spring has arrived! Though it seems like it’s taking a little longer for the warm weather to get the memo…

Here are the stories that caught our eye this week: Facebook and the Cambridge Analytica scandal, Instagram shopping, new music in support of March for Our Lives, and Marlon Bundo. Plus, emojis: the universal language of the future?

In a Maclean’s article published this week in response to the leak, Mitch Joel writes about the age of ‘surveillance capitalism’ and the way our personal information can be used against us to sway opinions and change behaviour.
If you’re late to the party, news broke last weekend concerning the accessibility of private Facebook data and how it was used by political consultants Cambridge Analytica to sway voters in favour of Donald Trump. About 50 million profiles were allegedly harvested to create content and target individuals with specific political messages.
Some may argue that Facebook is another victim here, but Joel makes an important point – it’s time to acknowledge that online privacy is nonexistent – do we really know where our data is being stored and who has access?

The Zuck finally responded to the scandal on Wednesday, admitting Facebook ‘made mistakes’ and will change how it shares data with third-party apps. From a financial perspective, reports say Zuckerberg’s taken a $5-billion loss (and counting) as a result of the exposé.

In light of the scandal, information about how to disable platform API sharing is making the rounds. Learn how you can opt out. Keep in mind that this disables all platform apps (like Twitter and Instagram) and you will not be able to log into sites using your Facebook login. For those of you wanting to take action that’s more extreme, there’s always the option to #deleteFacebook.

Emojis: The good and the bad

They’re a shorthand of digital communication that we all know and mostly love – emojis.
In a recent speech at Mobile World Congress, DJ Koh, the head of Samsung’s IT & Mobile Communications Divisions, boldly pronounced, “nothing is more important than how emojis are replacing words.”

As a visual form of communication, emojis tend to be more accessible or universal than traditional alphabet scripts. It’s a way to quickly convey emotion in a way that transcends different languages.

But there are drawbacks with emojis, too. Different emojis can carry different meanings with different cultures or even different generations (does the eggplant emoji ring any bells?). And not every operating system can read emojis – a heart posted to Facebook from your iPhone might read as a series of squares to some viewers on desktop. So think twice before you hit that send button!

“Found/Tonight” is a new track from Broadway geniuses Lin-Manuel Miranda and Ben Platt that was released this week in honor of the ‘March for Our Lives’ taking place March 24. The song is a mashup of Hamilton’s “The Story of Tonight” and Dear Evan Hansen’s “You Will Be Found.”

Good news: it’s streaming on all platforms today. Even better news: all proceeds from the song will go directly to the March for Our Lives initiative.

Check it out below:

You might have noticed Instagram looks a little different (again) these days. Launched in the U.S. llast year, Instagram Shopping rolled out in eight additional countries this week, including Australia, Brazil, Canada, France, Germany, Italy, Spain and the U.K.

The feature allows brands to tag products within their organic posts, and tapping on those tagged products brings Instagram users to more information including product details, pricing and links to brands’ websites where they can complete their purchases.

Tessa Virtue and Scott Moir hang out with Ellen Degeneres
And they want to make it clear they’re “definitely not dating.”

A day in the life of Marlon Bundo

John Oliver’s new book featuring Mike Pence’s furry friend Marlon Bundo is certainly a hot topic of conversation this week. Behind on the hilarious #BOTUS buzz? We have you covered.

Seems like Marlon doesn’t totally hate the attention, either.