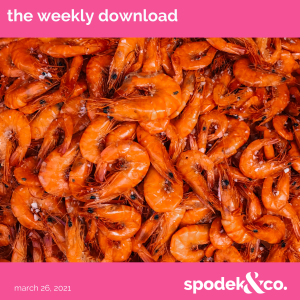 Welcome back and Happy Friday! We’re kicking off the weekend with another installment of The Weekly Download.

The Cinnamon Toast Crunch Shrimp Fiasco: What You Need to Know

If this wasn’t on your radar this week, where have you been?

Jensen Karp, musician-producer-personality, took to Twitter earlier this week to share his shock and outrage at finding a crustacean surprise in his box of Cinnamon Toast Crunch:

Ummmm @CTCSquares – why are there shrimp tails in my cereal? (This is not a bit) pic.twitter.com/tTjiAdrnVp

Ok, we’ll after further investigation with my eyes, these are cinnamon coated SHRIMP TAILS, you weirdos. I wasn’t all that mad until you now tried to gaslight me? https://t.co/7DmADmoqUt pic.twitter.com/rSLE60pvoy

Yep, those are shrimp tails, people!

It didn’t take long for the internet to become wholeheartedly invested, especially as Karp continued to update his followers on the unfolding saga. The verdict’s still out on how the shrimp tails got there (and if they’re really shrimp tails at all), but here are some of the internet’s best responses to the drama:

Hey I hate asking for help on here but I am asking you to be on the lookout for several shrimp tails that I seem to have misplaced. I haven’t been many places recently, just the car wash, the post office, cereal factory tour, an ATM visit, and a friend’s backyard. PLEASE HELP

“To save their company, Cinnamon Toast Crunch needs to make cereal classy again, and what’s classier than shrimp?” pic.twitter.com/pXs2RgZh5c

According to the company, the new actions will curb the spread of harmful content, like hate speech and misinformation, and make it harder for certain groups to operate or be discovered, whether they’re Public or Private. When a group repeatedly breaks Facebook’s rules, it will be taken down entirely.

Slack Backtracks on its “DM Anyone” Feature

After users brought up concerns of potential harassment and abuse, Slack has backtracked on its latest product update.

Slack Connect DMs was touted as a way to “replace email outside your company” by letting users send direct messages to any Slack user, anywhere. But for some users, concerns were raised that the new service included the potential for abuse.

My first reaction to this news was “oh, another way men can harass women on the internet.”

Did @SlackHQ talk to ANY women before rolling this out? https://t.co/jW6BGnIwq9

A new test from Twitter suggests the social network could be looking to shake up the way users react to platform content. According to TechCrunch, the company has been surveying users throughout the month to get input on how they feel about a broader set of emoji-style reactions, similar to what you’d see on Facebook.

Specifically, Twitter’s survey proposed a few different sets of reaction emojis, all of which include the heart (like), laughing face with tears (funny), thinking face (interesting) and crying face (sad).

Perhaps more controversially, Twitter is reportedly considering a way for users to signal a general like or dislike for the tweet with either a thumbs up or thumbs down, a “100” in either green or red to indicate “agree” or “disagree,” or a green up arrow icon or red down arrow icon, reminiscent of Reddit’s upvote and downvote mechanisms.

What are your thoughts about the proposed changes?

Tell us this isn’t the cutest thing you’ve seen all week!

If you’ve already seen a parrot petting a puppy today — and saying “I love you.” just keep on scrolling… pic.twitter.com/gIq0LsuzCV

Happy Friday! We’re glad to have you back for another edition of The Weekly Download.