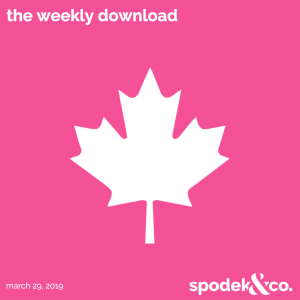 Another week has come and gone… let’s see what you might have missed out on, shall we?

This particular type of ad fraud, which ultimately drains users’ batteries and data, is known as “in-banner video ads.” Here’s how it works. App developers sell banner ads which are served to app users. Fraudsters then conceal auto-playing video ads behind those ads. No human actually sees them, but the ads are registered as having been served and viewed.

The scheme was uncovered by fraud detection firm Protected Media with additional reporting by BuzzFeed News. According to BuzzFeed, this is just one of the ways ad fraudsters siphon money out of the global digital advertising industry. The cost of all this trickery? A whopping loss of more than $20 billion ad dollars this year alone. Wow.

Nasa’s first all-female spacewalk has been cancelled… for now.

According to the agency, there’s a shortage of spacesuits that fit the astronauts. One of the two women on the mission, Anne McClain, will have to give up her spot to a male colleague, deferring the much-anticipated milestone moment.

From disappointment to anger, online reactions to the news were certainly mixed, but, you know, safety first when you’re in outer space! Ultimately, McClain felt that she would feel more comfortable spacewalking in a smaller size suit.

No news has been released yet on when the rescheduled event might happen.

And now for some news filed under “Canadians doing awesome things!”

Canadians Yoshua Bengio and Geoffrey Hinton are two members of the three-person team awarded this year’s $1 million US Turing Award – also known as the “Nobel of computer science.” This is a very big deal!

The researchers are responsible for developing a way for computers to “learn like humans” by imitating the human brain and how it functions using networks of “neurons.” This allows computers to acquire new skills much the way us humans do – by looking at examples and finding and recognizing patterns.

From voice, image and facial recognition to language translation and diagnostics, AI is getting smarter, faster and playing a larger role in our everyday lives. And, as with most advances in technology, we have to take the good with the potential bad – and hope AI doesn’t take over the world some day! LOL

Apple’s New Rewards Credit Card Will Be a Game Changer

Leave it to Apple to shake things up again in the smartphone world! This week, the tech giant announced the next evolution of Apple Pay – the Apple Card.

The card will integrate with Apple Wallet and Apple Pay and will function much like a traditional credit card with a little bit of Apple magic.

Issued by Goldman Sachs and running on MasterCard’s payment network, the card will earn “Daily Cash,” Apple’s version of cash back, at varying percentage rates depending on where purchases are made. Bonus? The card will have no annual fee, late payment charges or foreign transaction fees. Hopefully traditional credit card companies will take note!

No news on an exact release date yet, though projected availability will be sometime this summer, and only in the US. Tell us: will you be adding the Apple Card to your digital wallet when it becomes available?

Twitter has issued a warning against a new viral prank that is locking users out of their accounts.

We’ve noticed a prank trying to get people to change their Twitter birthday in their profile to unlock new color schemes. Please don’t try this. We don't have different color schemes based on your birthday.

The prank promises that changing the birth year on your account to 2007 will unlock special new colours for your feed. Instead, Twitter is automatically flagging these users as being under 13 years of age, leading to an account lockout.

One viral tweet seems to be the reason for the misinformation, gaining major traction across the platform with over 46k likes. Lots of users fell for the prank, leading to some serious face-palming.

So basically I fell for one of those “if you change your Twitter birthday to 2007, you get cool colour schemes and themes” tweets.

Now I’m too young to be on the app and have to wait until I turn 13 before I can use my og account.

“If you change your Twitter birthday to 2007 your twitter will turn all colorful”…. *changes birthday to 2007* “account locked must be 13 years of age to use twitter” cant believe i feel for that…thats the story of how i had to get a new twitter

If you were one of the ones duped by this prank Twitter says their team is happy to assist with account recovery. Lesson learned – don’t believe everything you see on the internet!

In what some are saying is “too little too late” Facebook and Instagram are finally banning white nationalism and white separatism on their networks, starting next week.

“Our policies have long prohibited hateful treatment of people based on characteristics such as race, ethnicity or religion – and that has always included white supremacy,” Facebook said in a statement posted to its website.

Last year Facebook banned white supremacist content but deemed white nationalist and white separatist content as acceptable: two ideologies that rely heavily on the concept of white supremacy. The social network claims they’re making progress when to comes to targeting hate from the platforms but know there is still lots of work to be done.

Facebook will also launch a new program on the website that returns a link to those searching for extremist content, encouraging them to get help at Life After Hate.

Sigh… Is it July yet?