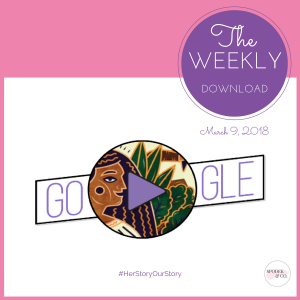 Friday, we missed you! Here are some of the stories we were following along with this week:

What’s different about this Doodle from the many others that feature prominent female inventors, scientists, writers, artists, activists, and philanthropists is that it focuses on sharing the stories and voices of another group of extraordinary women – the everyday women living all over the world.

Be sure to check out the stories in full at the link above, and share your own story using the hashtag #HerStoryOurStory.

Stay tuned and find out what Kali, Sara, Ava & Mina have in common—and why THEIR stories matter to YOU! 🤔 #HerStoryOurStory #SpotlightENDViolence pic.twitter.com/S982gPstSI

#HerStoryOurStory is part of the #SpotlightENDViolence Initiative. To learn more about this global, multi-year initiative focused on eliminating all forms of violence against women and girls, visit their #HerStoryOurStory’s website.

Coinbase, one of the largest cryptocurrency exchanges in the world, is launching an index fund for cryptocurrencies.

The fund will give users exposure to all of the assets listed on Coinbase’s exchange, GDAX, including Bitcoin, Ethereum, Bitcoin Cash and Litecoin.

For now, the CIF is only available to accredited investors who are also US residents. “We’re working on launching more funds which are available to all investors and cover a broader range of digital assets,” Coinbase said in a blog post.

The Coinbase Index Fund is currently accepting applications, though there’s no word on when it will begin trading.

Flippy, a burger-flipping robot located in Pasadena, LA, started work this week. He is the first of his kind destined to replace human fast-food workers in dozens of locations.

What’s your take on Flippy? It’s got us wondering what’s to come for fast food restaurants of the future – and beyond.

You don’t have to be a Bachelor franchise fan to know what happened this week. Twitter was totally abuzz with live updates from fans, critics and celebs.

A lot of people are saying that last night’s episode of #TheBachelor was one of the most dramatic finales ever. That sounds sorta familiar… #FallonTonight pic.twitter.com/IN0Pb4uJGm

In any case, the Twitter commentary was almost more entertaining than the on-screen drama, and definitely confirms that the best part of the show is community that’s grown around it. If you don’t watch the show, we recommend at least sticking around for the hilarious highlights on your feeds.

Spodek & Co. will be keeping an eye on these trends for our clients to help maximize reach and enhance strategy.

Alexa’s strange and spontaneous laugh is giving people the creeps

This one is too weird, Amazon. Some Alexa users are reporting that the virtual assistant has been randomly laughing – cue the creepiness:

@amazonecho alone in the dark kitchen, with no trigger, a sudden creepy laugh emerges and freaks out owners #justwrong. Replay: pic.twitter.com/vR684u8mbN

Lying in bed about to fall asleep when Alexa on my Amazon Echo Dot lets out a very loud and creepy laugh… there’s a good chance I get murdered tonight.

People are hoping that something is accidentally registering a command to laugh from some other noise. Amazon has yet to comment.

Did you catch the Oscars last weekend? Host Jimmy Kimmel had his sidekick Guillermo ask the hard hitting questions on the red carpet with plenty of tequila and treats in tow. The results did not disappoint!