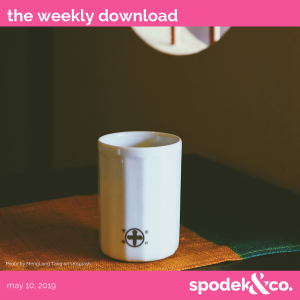 There’s no time to waste today – it’s a jam-packed edition of The Weekly Download!

On the hot sheet: Facebook’s far-right ban becomes PR failure, and how the app’s data will provide insight on elections and democracy. Plus, we’ve got info on Instagram’s new fact-checking initiatives, a canned water idea that’s generated over $1 million in funding, and how Google threw shade at Apple during a Pixel 3a event.

Then we’re rounding things out with Baby Sussex, Givenchy’s new not-so-secret spokesmodel, and HBO’s major Game of Thrones gaffe that includes your favourite hot beverage…of does it!?

Facebook announced it would be banning far-right figures and conspiracy theorists from its platform, but the execution hasn’t quite gone as planned.

Last week, the social network announced public figures including Alex Jones, Milo Yiannopoulos and Louis Farrakhan would be banned from Facebook-owned apps. But the company briefed journalists and made the announcement before the bans came into effect, providing these users with an opportunity to respond and encourage followers to move to other platforms.

The incident is being highly criticized online, and many are questioning why Facebook would attempt to turn the ban into a public relations opportunity, rather than quietly take action. According to Facebook, the takedowns took longer than the company originally anticipated, leading to further issues.

Facebook Data to be Studied for Impact on Elections

More than 60 researchers from 30 institutions will gain access to Facebook user data to study its impact on elections and democracy. The social network will allow academics to see what websites its users linked to between January 2017 and February 2019.

Notably, data will be missing from the US presidential election in 2016 and the Brexit referendum from the same year.

The researchers were chosen by the Social Science Research Council, a US nonprofit. Facebook maintains that the data set being analyzed cannot be used to identify individuals. Researchers will only be able to access data via secure portal and are limited on the number of queries that can be run.

Any post that could be deemed “hazardously false” will be sent for fact-checking, at which time it will be decided if the app should limit the post’s reach. Any posts flagged as false will stop showing up in the Explore section and in the results of hashtag searches.

While there are many similarities between initiatives to limit the spread of false content on these apps, there are also some big differences. If a user tries to share a post that has been deemed “hazardously false” on Facebook, they will be warned against doing so; no similar warnings will be issued on Instagram.

Google revealed two new Pixel smartphones this week that boast the company’s best-in-class cameras. During the unveil, Google took a direct shot at Apple’s iPhone with side-by-side image comparisons of low-light photography.
While the competing device was dubbed “Phone X”, it doesn’t take a genius to figure out which competitor was actually being called out. If you’re a current iPhone user but thinking of making the jump to a Pixel 3A or 3A XL, Google will also take up to $610 off the price of a new device with the trade in of an Apple product. Well played.
Your move, Apple.

Cessario’s background playing in punk and heavy metal bands influenced the product’s branding, which is aimed at a hard core yet “straight-edge” crowd that avoids alcohol and drugs.

File this one under “people will buy ANYTHING if it’s marketed correctly.”

The Newest Royal Baby Has Arrived!
A huge congratulations to the Duke and Duchess of Sussex this week as they welcomed their little bundle of joy, Archie Harrison, to the world.

The Duke and Duchess of Sussex were photographed earlier today with their newborn son at Windsor Castle. The baby has been named Archie Harrison Mountbatten-Windsor. pic.twitter.com/WtDH6oD3kn

Congratulations poured in from around the world when the news broke. Meghan’s former TV husband, actor Patrick J. Adams, had the perfect response when he heard the news:

Just heard that the world just got heavier by 7 pounds and 3 ounces. Much love to him and his incredible parents. Learned first hand 7 months ago how transformational becoming a parent is and couldn’t be happier for Meghan and Harry as they begin this adventure. #playdatesoon

And we can’t forget Adams’ tweet from 2017 in response to Harry and Meghan’s engagement:

She said she was just going out to get some milk… https://t.co/y7cnM0eC9D

Givenchy Teases Its New Not-So-Secret Face
Givenchy tweeted a teaser of its new “face of” on Thursday, and it’s so obvious that the internet couldn’t help but respond with jokes, teasing, snark and humour.

GUESS WHO? THE NEW FACE OF #GIVENCHY, REVEALED TOMORROW. pic.twitter.com/Ttkusa18ER

Some days, the internet just makes everything better.

Hawk-eyed fans noticed a major continuity error in last week’s episode of Game of Thrones, and the Internet had some feelings. It looks like the Mother of Dragons also enjoys a caramel macchiato from time to time (can we blame her?)

Daenerys Targaryen mother of dragons, the unburnt, the breaker of chains, the drinker of Starbucks #GameOfThornes pic.twitter.com/MPS9YbLRm1

GoT cinematographer: i know there are exactly the right amount of starbucks cups in the shot bc i shot it https://t.co/MKW5ifKKtb

And obviously, Starbucks couldn’t pass up the opportunity to comment:

The real kicker: although many were quick to assume the cup came from Starbucks, and it led to an estimated $2,3 billion in free advertising for the company, it wasn’t even its coffee cup!

Regardless of where Daenerys purchased it, the world’s most-famous takeaway cup has since been digitally removed according to HBO.