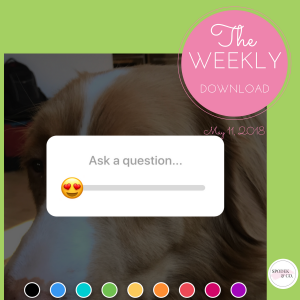 It’s FriYAY! Lots has happened this week in pop culture, social media and AI development. This Friday, The Weekly Download will be speaking to the power of video with Childish Gambino’s latest video release for his new single ‘This is America’, Snapchat and Instagram updates, and Google’s incredibly cool AI breakthrough.

Snapchat is rolling out their latest update after major backlash from their last redesign. Users major disagreement was with their snaps and chats being out of chronological order and the integration of chats and stories. Snapchat will go back to the original sorting of chats and stories on the left and right side of the applications centered camera.

As an added bonus, Snapchat’s update also allows hands-free video. Hands-free is a long-awaited feature enables users to use the video option without having to have their smartphone in-hand. It’s as simple as holding down Snapchat’s capture button and dragging the finger over the lock symbol to perform video recording in real-time.
Read more about what Snap CEO Evan Spiegal has to say.

Yesterday, Instagram released its newest engagement feature that allows users to attach an ‘emoji slider sticker’ to their Instagram stories. User’s pick an emoji relevant to their story post and followers can scale their reaction on the ‘emoji slider’. The idea was inspired by Instagram’s ‘poll sticker’ success. In this case, sometimes emoji’s mean more than words!

To see how it works visit Instagram’s Info Centre

Google has announced the company’s newest development in AI. Google Duplex, connects to your Google Home and Assistant and can make all those pesky phone calls you avoid making yourself. Need a haircut? A restaurant reservation? A doctor’s appointment? Google Duplex can have these types of conversations for you with real people or businesses and in real-time. Additionally, it will organize all of this information into your schedule for you.

Check out some of these authentic phone call examples provided by Tech Insider:

Childish Gambino is at the forefront of pop culture this week with his latest video release of ‘This is America’. The video powerfully illustrates America’s ongoing political and cultural turmoil within the black community. His use of honest and transparent storytelling through video has ignited an analytical dialogue internationally. The YouTube video’s engagement was through the roof with close to 75 million views at lastest count, thousands of comments and trending in almost every country in only five days.

Viral videos are a perfect reminder that we should be using video as often as possible in our communication tactics. Here are some key takeaways from Childish Gambino’s “This is America” video:

As the first Monday of May passed, so did 2018’s Met Gala, exhibiting Hollywood’s A-list celebs dressed in the theme of Heavenly Bodies.

Here are a few of our favourite looks:

I want to be Blake Lively’s dress when I grow up. #BlakeLively #metgala18 pic.twitter.com/KMpKVcbvwZ