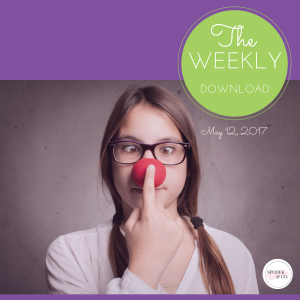 Winter, spring, summer or fall? Weather wise, we’ve had a taste all seasons this week. May didn’t get the memo that winter ended two months ago. Our hearts go out to friends and colleagues affected by floods.

As for the digital world, we’ve got a lot to talk about, including a social app’s new mental health campaign, TDSB’s ban on popular apps, a teen’s viral quest for free chicken nuggets, and some seriously awesome Friday Fun to kick off your weekend. We’d love to know what you want to see here too so please leave your suggestions in the comments.

This week Instagram launched a new campaign to let users know they’re not alone. The #HereForYou campaign aims to bring awareness to the topic of mental health and shine a spotlight on those who are helping others by sharing their stories.

The social app hopes that the campaign will help connect users seeking support to communities and resources. Check out the #HereForYou hashtag on Instagram for some pretty inspiring posts.

A new futuristic mini-city may be coming to Toronto

Sidewalk Labs, a Google sibling company, has reportedly applied to co-develop a 12-acre piece of land in downtown Toronto. Sources say that the company’s plan is to build a high-tech, futuristic city “from the internet up” where connectivity is built into the city’s foundation to enhance quality of life.

We don’t have many details yet, but it sure sounds interesting. What does your idea of a futuristic mini-city look like?

Students say goodbye to their favourite apps at school (for now)

This week the Toronto District School Board announced that Snapchat, Instagram and Netflix will no longer be accessible to students on school property – at least until June 30.

With so many mobile devices using the same (somewhat dated) network, slowness and lagging are making it harder for teachers to complete important tasks like report card writing, hence the temporary ban.

But will the ban work? We’re skeptical. With access to apps that allow you to bypass traffic blockers, something tells us there’s still hope yet for tech-savvy teens. And if tweens and teens are your target audience, don’t plan on reaching them online during the school day anytime soon.

This week, Carter Wilkerson surpassed 3.5 million retweets on a single tweet – the most Twitter has ever seen. The reason for all the virality? Chicken nuggets.

In April, Carter asked Wendy’s how many retweets it would take to win free chicken nuggets for a year. Wendy’s set the bar pretty high with a cool 18 million. Impossible? Maybe. But it didn’t stop Connor.

Since then, the post has gone viral – at the time of this blog post, Carter surpassed 3.5 million retweets and set a Guinness World Record. And yes, the post even beat Ellen DeGeneres’ famous Oscars selfie from 2014.
Even though Carter didn’t meet his goal, Wendy’s is still going to grant him his wish. It’s a win-win situation: Carter gets his nuggets free for a year, and Wendy’s gets some sweet publicity.

This one is a little out there, guys. A house for sale in Brantford started making its way around the internet this week for a very unique reason. We won’t spoil it here: you’ll have to see the listing for yourself! What did you think, creepy or kitschy?

WestJet is at it again with another awesome interactive marketing campaign!

The Dallas Morning News had a pile of tech issues they weren’t getting to, so they had a creative solution – they held a hackathon.And WIRED released their list of 20 Tech Visionaries You Should Have Heard of by Now. We’ll tell you all about them. We like when media puts a focus on female founders, so we’d like to direct your attention to a new series at NewCO Shift.

Guardians of the Galaxy Volume 2 opened last week, but you can open up a Doritos bag to get a taste – of the music? We’ll also tell you about that letter to the editor from that engineering student plus two stories about female fashion that hit social media this week. And a great idea from a Mic.com journalist to combat not seeing enough women behind the podium. HERE’S a 1,000 names, now stop saying you don’t know any women!