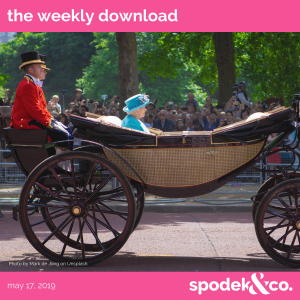 Happy Friday and Happy Victoria Day weekend to our Canadian readers! Let’s kick off the long weekend with another instalment of The Weekly Download, shall we?

This week’s hot news: Google’s new digital ad formats and what you need to know about the WhatsApp hack. Plus, could you be Queen Elizabeth’s new social media manager?

We’ll finish things up with some Friday Fun and take a look at the basket heard ’round the world! That epic buzzer-beater that had Raptors fans celebrating all week long.

New ways to advertise online will soon be available, thanks to Google.

The company will also start serving ads on its personalized news feed, called Discover. Back in September, Google said as many as 800 million people use Discover each month, but did not share updated figures or say how often ads will run there.

To keep up with Amazon, Google will also be revamping its shopping service. A new website will display personalized results and include a digital shopping cart. Future plans for the company include a standalone shopping app.

WhatsApp Security Flaw Means Your Personal Data Could be at Risk

Many people use WhatsApp because of its encrypted messaging service, but this week roughly 1.5 billion people learned their messages and personal data might not be safe after all.

Due to a security flaw within the app, location data, private messages, and other important personal information became accessible to hackers. By making a simple phone call to a WhatsApp user, hackers could install the spyware — the target wouldn’t even have to answer the call.

If you’re a WhatsApp user, it’s recommended that you update your app and pay attention to news outlets as more information about the hack is shared. WhatsApp believes only a “select number of users were targeted through this vulnerability by an advanced cyber actor.” Let’s face it folks, in the digital space, nothing is ever truly safe or secret.

Have a background in communications and a keen interest in the Royal family? You’re in luck! Queen Elizabeth is in search of a Digital Communications Manager, and you can apply on LinkedIn.

Applicants should have strong photography skills, “creative flair,” and “accurate and compelling written and editorial skills.” Responsibilities will include coverage of state visits, award ceremonies, and Royal engagement, as well as writing feature articles for the new Royal website.

Get your resumes in tiptop shape, folks!

Raptors fan or not, we’re sure you’ve seen all kinds of amazing footage from last weekend’s nail biter floating around online. Kawhi Leonard’s buzzer-breaker of a Hail-Mary basket won the game for the team, and moved them to the next round of the playoffs. It was a “sports moment classic” and, as usual, the internet didn’t disappoint!

In Korean, Portuguese, Turkish and more, here’s what the celebration sounded like around the world:

One fan had the moment tattooed on his arm, while other fans have done us all a solid and added some epic music to really pump up the feeling:

Good Luck to the Toronto Raptors as they face the Milwaukee Bucks in the NBA Eastern Conference finals! #WeTheNorth