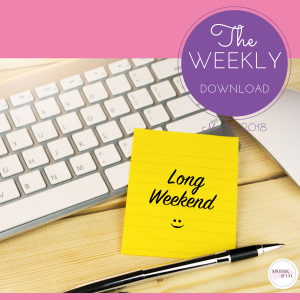 As the age-old tale goes, are you a Yanny or a Laurel? This Friday has welcomed us with beautiful weather and an extended weekend! On today’s agenda is a discussion about Twitter’s powerful fan-based engagement, a new way for your brand to use Instagram stories, the power of social media engagement, Canada’s ‘Alert Ready’ emergency alert system, and of course, the Yanny or Laurel debate with some Friday Fun.

Twitter Fans Are Responsible for Season Six of Brooklyn Nine-Nine

We got your SIX! #Brooklyn99 is officially coming to NBC! pic.twitter.com/NNQw2OZquH

Fans of Brooklyn Nine-Nine were not having any of it when Fox Television decided to drop the series after season five. Twitter fans started a movement protesting the demise of the Golden Globe award-winning show. The social media engagement on Twitter was so incredible that NBC decided to take over the Fox Television hit and announce that their network would be taking on #Brooklyn99 for a sixth season! Leave it to Twitter to get the job done.

For the first time, Instagram stories have been used to build your meals. Spanish Burger King customized their stories using the polling feature allowing users to create a customized Whopper and provided coupons for their orders. This brilliant idea for organic engagement cost the brand nothing and generated a ton of fantastic feedback. According to LOLA MullenLowe Madrid, the advertising agency who provided statistics for the campaign, @burgerking_ES increased their following by over 5k within the 24-hour Instagram story span. Spanish Burger King’s stories ordering is the perfect example of effective social platform use by a brand.

Canada has launched their new Alert Ready emergency alert system that will reach citizens across the nation, now by a mobile device. This government-issued alert system provides critical and potentially life-saving information by broadcasting about fire, natural, biological, hazardous, environmental, terrorist, civil and admin emergencies. Emergency alerts that are being sent to your mobile will not collect data about your mobile device and cannot be billed by service providers. The tones or vibrations associated with the broadcasting system are unique to Alert Ready, and help us distinguish the type of information that is being delivered to our mobile devices. You will only receive these alerts if you meet the three main criteria. First, that you have a device that connects to LTE (a smartphone), secondly, you are wireless public alerting compatible and third, that you are connected to a network at the time of broadcast release.

What do you hear? Comment what you hear 👂👇🏿and tag your friends #YannyLaurel #LaurelYanny #Yanny #Laurel pic.twitter.com/pwsWDa8mgd

Taking the world by storm is Yanny or Laurel. These two incredibly differing names are causing an international disruption on social media. The debate started on Reddit and has progressed to every social platform turning into an ongoing dialogue with users, celebrities and brands. The phenomenon is illusion within the ears that is caused by differing audio frequencies. Because the quality of the recording is low, people are hearing Yanny or Laurel based on the frequencies they are most attuned to. Whichever way you put it – watching the entirety of the internet go wild over a simple controversy is always entertaining.

I don’t think it comes as a surprise to anyone when finding out that Dave Grohl, frontman of the Foo Fighters, is the father to incredibly talented and musically inclined children. Here is Dave and daughters’ Violet and Harper performing the Foo Fighter’s “The Sky is a Neighborhood”.