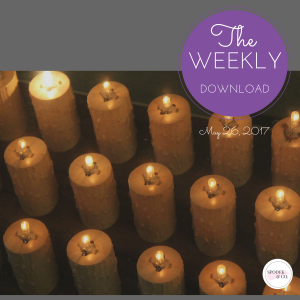 Although this week has been a short one for us Canadians with the Victoria Day weekend, it’s certainly felt long and emotional. Our hearts and thoughts are with all those have been affected by the tragedy in Manchester earlier this week. There’s few words to describe the heartfelt sadness and horror. I grew up going to concerts and remember attending my first one with friends and no adults when I was in middle school. I can’t imagine what is going through the minds of the survivors.

This week we saw social media play an important role following the tragedy in Manchester.
Facebook turned on their “Mark Yourself Safe” feature in the area to help users broadcast their safety to friends and family. Twitter helped reunite one missing teen with loved ones through images and retweets, and also became a place for celebrities to share their messages of support for those affected by the attack.
The stories of reunion and messages of love are certainly a heartwarming in the midst of tragedy and sadness.

A new Facebook update released earlier this week will allow people to keep watching videos as they scroll down their news feed page on desktop. While mobile users have been able to watch and scroll since February, the update is just rolling out for desktop users now.

For Facebook users, the update brings added convenience. For the app itself, the update may bring new advertising inventory and increased load times.

We’re interested to see how the new update will affect video engagement and view rates.

Chatbots have certainly been on the rise with brands and businesses. Now, new Direct Message Cards will allow brands to advertise these chatbot interactions on Twitter.

Advertisers can customize these cards with an image/video and up to four call-to-action buttons. Once clicked, these CTAs allow the bot to follow up with a relevant DM.

It’s important to note that the focus of these bots is not to solve customer service issues or help place an order, but rather to offer a fun interaction with the brand. One cool example of the Direct Message Card in action is Patron Tequila’s “bot-tender”– just click the perfect “summer moment” to have drink recommendations served up in a second.

What do you this of Twitter’s new advertising feature?

Instagram adds support for landscape and portrait plus links in Direct

Yesterday Instagram announced that Direct is about to get a little more user-friendly.
Forget about cropping those photos you’re sharing from your camera roll in Direct; the app now supports landscape and portrait orientation photos – no cropping required.

Even more exciting, you can now share links in Direct (aka direct messages) and preview them right from your message thread.

To say we’re excited for the Wonder Woman movie to hit theatres is an understatement. We’re starting to see cool content and ads everywhere we turn online – and it’s all awesome.

Design your own amazonian cuffs using the Gauntlet Creator, play the new Wonder Woman 16-bit Snapchat game, or add a mask to your next selfie on Facebook to help celebrate the launch of Wonder Woman.

The Star Wars franchise turned 40 yesterday — can you believe it?! In honour of the milestone, we’re sharing two awesome videos for this week’s Friday Fun.

Mark Hamill Goes Undercover as a Stormtrooper on Hollywood Boulevard

Who knew that Instagram was such a competitive social network? Insta-star Sara Melotti in the Daily Mail it turns out. And the Globe and Mail has an interesting story about the online community and if it’s even worth saving. The 11 richest self-made women in tech are worth a combined $10.3 billion and PRNewsWire has a list of the best tech companies in Silicon Valley for women to work at. And finally, two AI stories for this week – one from Google and one from Wired.