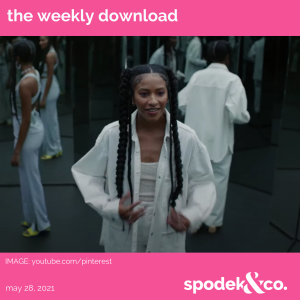 Welcome back to The Weekly Download! It’s time to recap the biggest news in tech and marketing that you might’ve missed this week.

Could this be a hint of the future of social media?

In a new article in Digiday, Vice Media Group’s Cory Haik says that with the development of a new in-house mobile app called Stories Studio, the company has turned to more stories-style content across platforms like TikTok, Instagram, Facebook, and even LinkedIn.

According to Olly Osborne, managing director of Europe at Vice Digital, Stories Studio helps Vice create over 3,000 pieces of original content each month. The pivot has produced encouraging results, with average impressions per post up 72% across the company. The stories-centric focus has grown Vice’s Instagram audience from just over 100,000 followers to over 600,000 in the span of six short months.

Vice isn’t the first company to shift towards stories, and we have a feeling they surely won’t be the last. Are you taking advantage of stories on social media?

Before liking a new page that’s repeatedly shared fake news with followers, Facebook will now share an alert with users. It’s another step to combat disinformation on the platform, and one Facebook hopes will make users think twice before subscribing to a Page and its updates.

The pop-up will tell users that the page has “repeatedly shared false information,” and that “independent fact-checkers said the information is false.” An accompanying “learn more” link will redirect users to more information on why the page has been labeled as such and additional literature on Facebook’s fact-checking program.

The company also says it will expand penalties for individual Facebook accounts that repeatedly share false information, noting that other users will see less of them in their feeds.

A new TV and digital advertising campaign from Pinterest highlights the company’s expanded product discovery opportunities, thanks in large part to its smart interest matching.

Here’s what Pinterest CMO Andrea Mallard had to say about the update and accompanying ad campaign:

“We all know time is our most precious resource and yet we give it up so freely to things that give us nothing in return. Pinterest is the invitation to reclaim some of that time. To explore with it, experiment with it and put purpose to how we spend it. As we think about how the next generation is manifesting every facet of their lives, this campaign emboldens them to do things that actually bring them joy.”

In an effort to connect with some of its youngest constituents, the White House is turning to Snapchat to engage and educate teens on the benefits and safety of the COVID-19 vaccine, which was recently approved for those 12 and up in the US.

A new series of Snapchat Lenses featuring President Joe Biden, Vice President Kamala Harris and Dr. Anthony Fauci, among others, shares information about the vaccine and how people can register to get their shots.

According to Snapchat, the app reaches roughly 90% of 13-24 year olds across the US (even more than Facebook, Instagram, and Messenger combined!) making it a good way to reach – and hopefully engage – this demographic cohort.

There’s a new heavy metal star in town, and she couldn’t be cuter!

With her dad’s help, baby Liz rocks out to classic heavy metal songs. Check it out for yourself below!