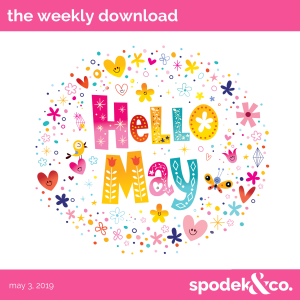 Hello again and Happy May!

Today we’re covering how Chase’s #MondayMotivation went wrong, highlights from Facebook’s F8 conference and some big updates on Instagram and Facebook. Then we’ll wrap it all up in a bow with some Friday Fun.
Let’s dive in!

Chase was the talk of Twitter this week…but not in a good way. The bank’s twist on #MondayMotivation didn’t quite resonate with its audience:
“You: why is my balance so low.
Bank account: make coffee at home
Bank account: eat the food that’s already in the fridge
Bank account: you don’t need a cab, it’s only three blocks
You: I guess we’ll never know
Bank account: Seriously?”
Ouch.
The criticism was fast and furious, with twitter users blasting the company for its insensitivity, poor-shaming, and downright hypocrisy.

PEOPLE: Why is my bank account so low?#CHASE BANK: You know our full name is JP Morgan Chase? Well, JP Morgan made his $ in the slave trade. Our bank owned slaves, and let clients use them as collateral. Did we make reparations? LOL. Also, stop taking cabs. @Chase https://t.co/cKcF2u1eok

love when institutions that caused a global financial meltdown tell me poverty isn’t structural but actually about personal responsibility. pic.twitter.com/fglMfVFzH6

Chase has since deleted the original tweet and posted the following message in apology:

Facebook’s annual developer conference took place this week and based on the company’s recent history, it’s no surprise privacy was at the forefront of the conversation.

Using his personal Facebook page, the Zuck announced that end-to-end encryption will become the default for platforms like Messenger and WhatsApp. Facebook has been redesigned to make communities as central as friends are, and the company has added new, secure ways to buy things on Instagram.

Other priorities for the social giant include using augmented and virtual reality to create more personal and intimate experiences online by bringing WhatsApp to Portal, adding end-to-end encryption for all calls, and launching Portal internationally.

Check out the full F8 recap to see what else you might have missed.

And speaking of Facebook, a sneak peek at its new website and app design was released at F8.
With an endless scrolling feed, focus on Groups and messages, light and airy aesthetic and placement of Stories front and centre, it’s certainly reminiscent of another Facebook-owned entity.

But what’s missing from the app speaks volumes. As Fast Company reported, a true, privacy-minded redesign would provide ways for users to give consent about the company’s use of their data. Unfortunately, a tool to wipe your Facebook history, something Zuckerberg promised in 2018, still has not arrived.

Last week, we shared that there was some online speculation about like counts disappearing from Instagram. While the company initially denied the buzz, this week it was confirmed that the testing of hidden likes will be happening in Canada.

The test is meant to bring more focus to the photos and videos being shared on the app instead of the number of likes they generate. Users will still be able to see the number of likes on their own posts by tapping the “Likers” list, but this information will not be available to others.

What are your thoughts on the test? Would this be a welcome change to your feed?

Starting this week, Instagram users in the U.S. will be able to raise funds for nonprofits while scrolling their feeds.
Using the fundraising feature couldn’t be easier: take or upload a photo within Instagram and tap the “Sticker” icon, then select “Donation.” Choose the non-profit you want to support, and customize the fundraiser however you like using the creative tools available. After the Story and its donation sticker are live, you’ll be able to see how much you’ve raised at any time by swiping up on the Story.

If see a sticker, and would like to help support the organization featured, just tap the “Donate” button on the sticker and follow the prompts.

While the feature is only available in the U.S. for now, the platform plans to roll it out globally in the future.

Don’t believe in reincarnation? Think again, because a young Welsh actor has managed to one-thousand percent embody the flamboyant superstar. Watch for Taron Egerton as Elton John in the upcoming biopic, Rocketman. Here’s a sneak peek!

And speaking of reincarnation, the genes are strong in the Royal Family. Kate and Wil’s daughter Charlotte recently turned four, and she’s the spitting image of a young Queen Elizabeth! Have a look!