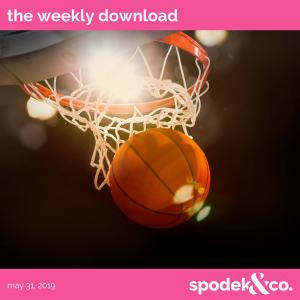 This week’s big news: a heartwarming new ad from Gillette, a good-intentioned tweet from the US Army gone bad, Twitter’s white supremacy research, the Raptors make NBA history, and some peculiar freckle placement that has the Internet abuzz.

Then we’re topping it all off with Kodi Lee, a 22 year-old America’s Got Talent hopeful who’s as inspiring as he is talented.
Ready? Let’s go!

Another heartwarming video from Gillette made the rounds on the Internet this week. The sweet clip shows Samson Brown shaving for the first time with his dad lovingly coaching him along.

Whenever, wherever, however it happens – your first shave is special.

‘Whenever, wherever, however it happens – your first shave is special,’ says the video’s caption.
Gillette made headlines earlier this year for its advertisement highlighting toxic masculinity. While many people praised the ad for its initiative, others slammed the brand for being too “political.”

US Army Tweet Highlights the Realities of Veteran Suicides

“How has serving impacted you?”

It was a well-intentioned question asked by the US Army on Twitter during the Memorial Day Weekend.

Hear from Pfc. Nathan Spencer, a scout with @FightingFirst who shares how the #USArmy has influenced his life.

While some replies were positive and acknowledged life-long friendships, many others shared heartbreaking stories of post-traumatic stress disorder, difficulties with the Veterans Administration, or loved ones they lost to suicide.

The Army responded with a series of tweets thanking respondents for their stories and sharing their commitment to health, safety, and well-being of soldiers.

A Tiny Freckle is Freaking Women Everywhere Out

This week, Twitter user Aaryn Whitely posted a photo of her wrist alongside the wrists of some female friends, and made the claim that every woman has a freckle in that spot.

ladies….. u got a freckle on the middle of ur wrist or is this a myth lmao pic.twitter.com/VpwkkeWKTj

People online were shook — it turns out a lot of women do in fact have freckles in that same exact place. The tweet now has over 22k retweets and thousands of replies, many of which feature pictures of other wrist freckles. Yes, we know it’s random, but it’s a bit of fun, nonetheless.

WTF
(I also have one on my left wrist but it isn't perfectly centered like this one) pic.twitter.com/QXDEnPF6dw

Do you have a wrist freckle? Let us know in the comments below!

It’s a pretty obvious “no” to us, but apparently Twitter needs to research whether or not white supremacists should be allowed on its platform.

The social network is conducting “in-house” research to better understand how white nationalists and supremacists use the platform and determine whether or not a ban is appropriate.
Says Vijaya Gadde, Twitter’s head of trust and safety, legal and public policy, Twitter believes “counter-speech and conversation are a force for good, and they can act as a basis for de-radicalization, and we’ve seen that happen on other platforms, anecdotally.”

Twitter has faced repeated criticism for not taking a more aggressive approach towards “deplatforming” white nationalists in the past, but says it bans “hateful conduct” and “abusive behaviour.”

No timelines or potential policy changes have been announced by the company as of yet.

This week’s Friday Fun is inspiring as it is heartwarming. When 22 year-old Kodi Lee took the stage at America’s Got Talent, there wasn’t a dry eye in the room.

Watch the clip and hear Kodi’s amazing story for yourself below.

And of course, we couldn’t leave you without a HUGE shout out to the Toronto Raptors! They made NBA history last night not only by being the first Canadian team EVER to play in the NBA finals, but they added a cherry on top by beating Golden State in game one – at home!! Toronto’s on fire, and really the entire country is rallying behind Canada’s team. Let’s Go Raptors! Bring it home.