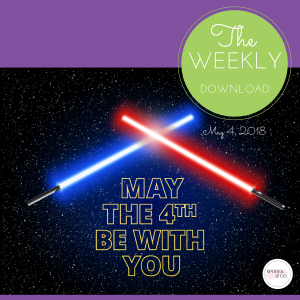 We’re coming at you with another installment of The Weekly Download today, and it’s not just any Friday – today also happens to be Star Wars Day! May the Fourth be with you! How will you be celebrating?

All the details you missed from Facebook’s F8

Facebook’s F8 conference kicked off this week and there were lots of announcements and updates. Here are some of the most notable:

For more information on the news you might have missed, check out this roundup by TechCrunch.

Did you get a message from Twitter advising you to change your password? You weren’t the only one.
In fact, Twitter’s 330 million user base has been prompted to change their passwords after a bug exposed them in plain text.

We are sharing this information to help people make an informed decision about their account security. We didn’t have to, but believe it’s the right thing to do. https://t.co/yVKOqnlITA

While there is no known breach or evidence of misuse due to the bug at the time of writing this article, Twitter’s taking a proactive stance to protect its user base.

Amazon is expanding its Vancouver tech hub with a new headquarters

An expansion move by Amazon in Vancouver will bring a reported 3,000 high tech jobs to the city in fields like cloud computing, machine learning, and e-commerce tech.

The new headquarters will open in addition to Amazon’s existing Vancouver offices. Amazon already employs over 6,000 Canadians, 1,000 of which are researchers and engineers in the Vancouver area.

Check out the early renderings of the new HQ coming to the old Canada Post headquarters on Georgia Street.

Last but not least, we can’t let this piece of weird news go unnoticed.

Toronto drivers alarmed after spotting burned-out car hanging from bridge. Police mystified, say initial assumption it was part of a movie shoot is probably false; no permit was issued. pic.twitter.com/PJ40nwnVGD

Emergency services were called earlier this week when a car was found dangling from the Leaside Bridge in Toronto. Details about why the car was placed there are still scarce and it looks like Toronto Police will be launching an investigation with potential mischief charges to follow.

Early guesses for the reasons behind the car’s placement hinted at a prank or movie stunt. For now, one could say we’ve all been left “hanging.”

Watch these creative geniuses grow up in seconds
Although it might be hard to imagine that the Zuck or Elon Musk were ever carefree kiddos, these cool GIFs remind us that everyone starts somewhere.

Céline Dion and Ryan Reynolds star in new Deadpool 2 music video
It’s being touted as Canadiana gold, and we have to agree.