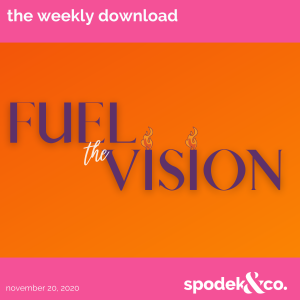 Welcome back and Happy Friday – let’s kick off the weekend with another installment of The Weekly Download!

This week we’re thrilled to announce the launch of a new initiative close to our hearts, Fuel the Vision.

Created by Spodek & Co.’s Founder, Eden Spodek, and Samiksha Khanna, Fuel the Vision was inspired by women with resilience, passion and leadership. Women who have unapologetically trailblazed their way through the glass ceiling: think Oprah Winfrey, Sheryl Sandberg and of course, Vice President-elect Kamala Harris.

Their success stories got Eden and Samiksha thinking about the incredibly driven, accomplished and intelligent women in leadership within their own networks who inspire them. How did they get there? What were their struggles and triumphs? By asking them to share their stories, Fuel the Vision hopes to encourage others to fiercely pursue their greatest desires and achieve their biggest goals.

BuzzFeed To Acquire HuffPost in New Deal with Verizon Media

Announced just yesterday, BuzzFeed will acquire HuffPost as part of a multi-year partnership with Verizon Media. Owned by Verizon Media since 2015, most HuffPost staffers only learned of the news following a report by The Wall Street Journal.

As part of the deal, Verizon Media will make an undisclosed cash investment in BuzzFeed. In a release issued to BuzzFeed staff, the company confirmed HuffPost will continue to operate its own website, social media channels, and app.

The deal is big news for digital media, with two of the web’s biggest players coming together to better compete in an increasingly crowded space.

It seems like we have an Instagram update to share almost every week, and this week is no exception. Instagram users can now search by keyword on the app – previously, searches were limited to hashtags, locations, names, and usernames.

According to The Verge, if you previously wanted to find healthy recipes, for example, you’d only be able to search for posts that tagged #healthyrecipes or accounts with variations on “healthy recipes” in their name or bio. Now, however, Instagram will let people search the keywords themselves, meaning posts that feature healthy recipes should surface, even if the specific tag is missing.

This upgrade is great news for marketers, allowing users to more easily find the content they’re most interested in. Businesses should ensure their post captions include keywords that matter to their audiences.

That thing you didn’t Tweet but wanted to but didn’t but got so close but then were like nah.

We have a place for that now—Fleets!

Rolling out to everyone starting today. pic.twitter.com/auQAHXZMfH

Twitter hopes that the new “fleeting” messaging feature will help reduce some of the pressure around tweets, allowing users to express more casual thoughts and feelings that will ultimately disappear.

Have you given Fleets a try?

Brands Get in on the “This Claim is Disputed” Meme Fun

When Twitter began putting content accuracy warning flags on some political tweets earlier this year, who would have thought that it would spark a meme?

Users have taken warning flags into their own hands, using the opportunity to create some hilarious content – and brands are starting to get in on the fun:

me: do you want anything from BK?

her: no thanks I’m not hungry

Time passes at a normal rate during a Tabata class.