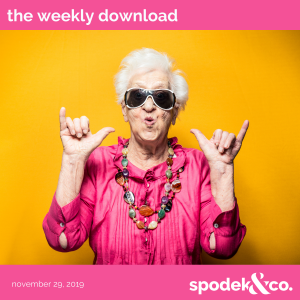 Welcome back! A belated Happy Thanksgiving to our American friends. It’s time to kickstart your Friday with a hearty helping of The Weekly Download.

Yesterday morning, Instagram suffered another outage that caused access issues for users all over the world. The outage didn’t affect all users or the entire app – most issues reported involved the news feed.

People were quick to make jokes on social media – the outage corresponded with American Thanksgiving and people had some (funny) feelings:

Us having to actually talk to our families now that instagram is down on thanksgiving#instagramdown
pic.twitter.com/BQdLLzQ1LO

Earlier this week, Twitter announced it would be removing inactive accounts to free up usernames in December. For people eagerly awaiting a new username currently in use (but inactive), it was a welcome update. For friends and families of Twitter users who have passed on, it was concerning.

The announcement led to a lot of confusion, so much so that Twitter decided to pause its plan to remove inactive accounts until it can offer a way to memorialize those belonging to the deceased. The company apologized to users for the “confusion and concerns” it caused and vowed to keep the public updated.

Twitter also clarified that the initiative only affects the European Union – for now. There’s no word on just how many accounts may be affected.

In support of World AIDS Day on December 1, CATIE has launched a social media campaign featuring a video in which HIV-positive persons and their partners discuss how they had “the talk.”

The #CantPassItOn campaign features a short video with an important message, and one that’s certainly worth a watch:

According to the UNAIDS Data 2019 report, an estimated 770,000 people worldwide died of AIDS-related illnesses in 2018. There were an estimated 37.9 million people worldwide with HIV in 2018. While we’ve certainly made progress with regard to the national and global response to HIV, there’s much more to achieve.

In preparation for the holiday season, Pinterest has launched a small business shop. The initiative is part of the company’s larger plan to assist users with shopping directly within the platform.

Aptly called “The Pinterest Shop,” the new feature will allow Pinterest users to shop from a curated list of 17 small businesses ahead of Small Business Saturday (November 30).

Have you been following along with Twitter’s prototype app, twttr?

The company has used twttr to test new ways to display conversations, and some of these features are starting to make their way onto Twitter.com, giving the platform a “message board-like” feel.

The concept first appeared on its experimental Twttr iOS app, and now it might come to the web app too! It helps keeping track of the flow of conversation pic.twitter.com/wlOvTR4IWP

What do you think about the new look? Do you think it will streamline the responses and replies on the platform?

Considering a New LinkedIn Strategy? Check Out The Top Stats from 2019

Are you starting to think about the changes you’ll make to your web presence in 2020? A new infographic from Social Pilot shares the stats you’ll want to know.

Get the infographic in full here.

Ginette Bedard ran her first marathon ever at age sixty-nine and runs ten miles every day. This year, at eighty-six, she ran her seventeenth New York City marathon.

Prepare to be inspired!

Ever wondered what it would be like if E.T. found his way back to earth? The reunion you’ve been waiting for is finally here!