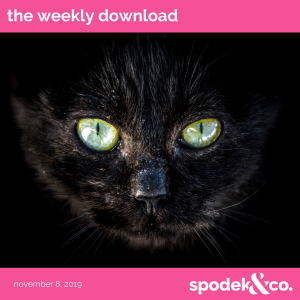 Happy FriYAY! and welcome back to The Weekly Download! Here’s what on the hot sheet today: all about Google’s BERT update, how Facebook might fight fake accounts, Twitter’s user-friendly change, a new kind of YouTube ad, some purr-fectly hilarious Friday Fun, and more.

According to Google, BERT will impact 10% of all searches, and while it might have some impact on your brand’s organic visibility and traffic, you might not notice.

According to Search Engine Land, BERT will help Google better discern the context of words in search queries. For example, in the phrases “nine to five” and “a quarter to five,” the word “to” has two different meanings, which may be obvious to humans but less so to search engines. BERT is designed to distinguish between such nuances to facilitate more relevant results.

So, how will BERT affect your strategies for search engine optimization? The good news: it won’t! Google’s advice on ranking well remains the same — keep crafting content that keeps the user in mind and satisfies their search intent with good writing.

Facebook’s working on a new tool to fight back against fake accounts, and it involves a video-based verification system.

According to newly uncovered screenshots from Jane Manchun Wong, the system asks users to record short video clips of their face in order to confirm identity and also check that the user is a real person.

This is how Facebook's Facial Recognition-based Identity Verification looks like

It asks me to look at several directions within the circle

It explicitly states no one else will see the video selfie and will be deleted 30 days after the confirmation pic.twitter.com/296bGRDyYZ

Facebook says that it is in fact testing out the new feature, but that it does not use facial recognition — a technology the company previously came under fire for in connection with automatic face tagging. Instead, it detects motion and whether a face is in the video.

This week Google announced the launch of Shopping ads on YouTube — ads that allow brands to advertise their products and services directly in the YouTube home feed and search results.

Ads can appear at the top of the YouTube search results page, or as a carousel between videos on the homepage. According to Google, ads are shown to YouTube users based on their interests as well as product details and information submitted by brands through the Merchant Center.

Twitter is finally starting to roll out its latest feature to make the social network more user-friendly and improve conversations on the platform. The new update, launching to all users on November 13, will allow users to follow topics of interest just as they would follow other users.

To start, Twitter will focus on roughly 300 topics, including sports, entertainment and gaming. After following a topic, Twitter will pull tweets from relevant accounts into your timeline.

A rogue feline made its way into the end zone in the second quarter of the Giants vs. Cowboys game earlier this week, and the Internet (obviously) loved it:

Kevin Harlan’s call of the black cat on the field is CLASSIC 😂😂 pic.twitter.com/cL1euA3IKg

Immediately adding that black cat in every one of my fantasy leagues. Elite athlete.

Can’t believe they’re showing the black cat that ran into the field. Just encouraging cats everywhere to run onto football fields to try and get famous