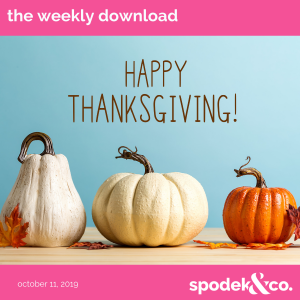 Happy Fri-YAY, and Happy Canadian Thanksgiving! The long weekend has finally arrived, and so has another edition of The Weekly Download.

Instagram has removed the Following tab, a feature better known for being a “stalking tool” rather than one to assist with new account discovery.

Instagram will now direct users to its Explore tab to find new people, places, and hashtags to follow. According to the company, the Following tab was only used by a small number of people on a regular basis.

There are numerous stories of people’s private lives/activities being outed because of what they were liking, following, and commenting on via the Following tab.

Following the tab’s removal, you’ll only be able to see your own activity when you click the Heart button.

This week, Twitter admitted to using phone numbers and email addresses associated with two-factor account authentication to serve targeted ads. According to the company’s disclosure statement released Tuesday, the number of users impacted is currently unknown.

Twitter said the issue stemmed from its tailored audiences program — a product that allows advertisers to target ads based on the advertiser’s own marketing lists. When an advertiser uploaded their marketing list, the company says it may have matched people on Twitter to their list based on the email/phone number that the user provided for safety and security purposes.

It’s yet another gap in security at Twitter, following the company’s admission to storing passwords in plaintext, a phone number leak bug, and a confirmed location data leak.

Facebook has admitted to overinflating video-viewing metrics over an 18-month period from 2015-16 following a lawsuit launched by advertisers who claimed they overpaid based on the skewed data.

Now the company will spend $40 million to settle a class-action lawsuit due to the inflated data, even though Facebook previously claimed the lawsuit was “without merit.”

According to coverage by Variety, at the core of the dispute was Facebook’s method used to calculate video viewing time. The company’s policy dictated to not count video views that lasted less than 3 seconds. However, by discarding shorter video views, the company also arrived at higher average watch times — and the lawsuit alleged that this allowed the company to inflate average watch metrics by up to 900%.

While the inflated numbers didn’t directly affect how much advertisers paid for video ads, it led them to believe ads were performing better than they actually were.

The settlement will provide up to 40% of the estimated $100 million affected advertisers “may realistically have been able to recover” had they won the case in court.

Apple CEO Tim Cook is standing by the company’s controversial decision to remove an app from the app store that was being used by Hong Kong protestors to track police activity. It’s the second time the company has acted in accordance with Chinese censorship demands, also removing the app for US publication Quartz in the Chinese market.

Apple removed HKMap Live from the app store on Thursday, claiming the app was being used to “maliciously target individual officers for violence” and “victimize individuals and property where no police are present.”

The protests, which started in June, come in response to the extradition bill introduced in April 2019 that would allow for criminal suspects to be extradited to mainland China under certain circumstances. While the bill was finally withdrawn in September after months of demonstrations and unrest, clashes continue between police and protestors with changing demands.

If you haven’t seen this one yet, it’s worth the watch… trust us!