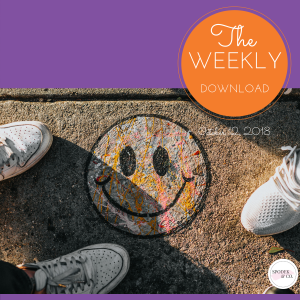 Happy Friday, everyone! The Thanksgiving Monday made for a short and sweet work week here in Canada. Our pants may be a little tighter, but the company and delicious spreads made it well worth it!

We’ve got a few newsworthy updates on the docket today! This episode of The Weekly Download is discussing an app that makes mental health care accessible, Snapchat Originals, the Google+ leak, a recommendations app and “Oddly Satisfying” videos with some Friday Fun!

A couple of days ago, people across the globe celebrated World Mental Health Day. Social media platforms were flooded with mental health related posts speaking to everything from the continuing stigma around the issue, to the related day-to-day struggles and necessary support needed. It’s not often that we see such a large community of individuals speaking as such a united, very open front.

There are many avenues available when it comes to mental health support—one of them being therapy. Therapy, however, usually requires long waiting periods and is often costly, making it inaccessible for many. Something ex-Uber executive Andrew Chapin realized after suffering from severe anxiety—a not so uncommon symptom in today’s world.

Chapin left Uber to pursue his own startup, Basis. Basis is an app for individuals who are struggling with anxiety, depression and other mental health issues. The app is a meeting place for people seeking mental health support and paraprofessionals.

What does this mean? Chapin uses paraprofessionals—basically people trained in research-backed approaches but not as highly certified as a counselling or clinical psychologist. This allows Basis users access to quality mental health care in the form of 45-minute chat or video sessions for only $35.00. Yay for technology and accessibility!

Snapchat might be the first social media channel to successfully create short-form content that feels like you’re actually watching a television series. This new serialized, scripted programming—produced exclusively for Snapchat—covers genres like comedy, drama, docu-series and horror, with much more coming down the pipeline!

According to variety.com, the Snap shows feature writers from already established programs like Riverdale and Friday Night Lights, and generally run around five’ish minutes long each. The Snap Originals are all formatted for vertical viewing, and new episodes are released each day.

Google may run the internet, but their social platform, Google+, is shutting its doors. Why? Because the tech giant were recently were forced to admit they exposed the private data of hundreds of thousands of Google+ users, from 2015 through early 2018.

And while the Wall Street Journal was the first to report on the social network’s security glitch, this wouldn’t be the first time that users’ private information was exposed to third parties – queue Facebook rant! But it is uncommon and frankly rather stunning that an organization as large as Google tried to pull the wool over our eyes. Bad form, Google. Bad form.

The New App That Keeps All Your Recommendations in One Place

If Bill Gates is backing an app, you know it’s got to be good! Gates has been working with the team over at Likeable to develop the app, called “Likewise,” that allows users to follow friends and track their personal recommendations, be they books or movies or a night out on the town. You’ll no longer need to search endlessly through your texts messages for that restaurant your best pal recommended to you months ago!

.@Likewise is a great new app that makes it easy to save and share recommendations with friends and family. It’s been a lot of fun working with the team at Likewise, and I’m excited to see what you think of it. https://t.co/P1n0iEk0UK

Cutting slime, icing cakes, and power washing… we’ve all come across these “oddly satisfying” videos on our Facebook and Instagram feeds. These strange but wonderful videos attract millions of views and foster high engagement among friends. But why are they so oddly satisfying?

Well, it appears the attraction boils down to psychology. Broken down into three pillars: mediation, mood and aesthetic, media psychologist Jessica Gall Myrick spoke to LiveScience about their appeal.

“Even if you don’t consciously realize you’re stressed, your body is aware that you’re stressed or physiologically aroused,” she said, using the scientific term for being in a state of high alertness. “That could drive you toward this type of soothing, interesting content.”

It’s no secret that the digital world keeps our minds in constant motion. So it comes as no surprise that #oddlystatisfying videos are are commonly repetitive and slow paced, both of which are integral aspects of meditation.

They also illicit emotions like curiosity and interest which contribute to improved moods, according to Myrick. We are fascinated by things we don’t see every day.

What’s the cherry on top? Aesthetics. Bright colours, shapes, symmetry and movement are only a few reasons we are obsessed.

What are your favourite #oddlysatisfying videos?

Taylor Swift’s performance at this year’s AMAs lit up Twitter like a Christmas tree with some hilarious tweets. Not only did she slay on stage, but she took home four awards making her the most decorated female in AMA history!

Check out the performance and tweets:

RIP US FOR WE HAVE DIED AT THE HANDS OF THE QUEEN. OMFG WE LOVE YOU @taylorswift13. #AMAs #TaylorsSwiftAMAs pic.twitter.com/p8FlC4xFND

I walked out of my room wearing this and my mom rolled her eyes so that’s where I’m at #TaylorsSwiftAMAs pic.twitter.com/0WURvk7KAR

ALSO, THIS! No explanation needed…