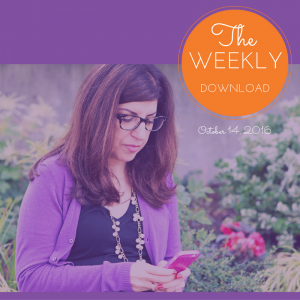 I hope you’ve had a wonderful week. It’s sure flown by, hasn’t it? There’s been so much in the news and if you’re tired of hearing about politics, please accept my apologies in advance. The upcoming U.S. election is difficult to avoid but I promise this week’s post includes stories only with a fresh perspective. If you have an upcoming election in your country/province/state/city, please exercise your civic duty. Do your research, learn the facts and make your vote count!

My heart goes out to everyone affected by the tragedy of Hurricane Matthew, from Haiti to North Carolina and Atlantic Canada. Too many people lost their lives and many have their livelihood at stake right now. Here’s how you can contribute to the relief efforts though the Canadian Red Cross.

On a much lighter note… Are you excited about those Jays? Tonight they enter the series for the ALCS title with Cleveland. Let’s see if they can take the title in three games.

If you have something to say, please add it to the comments or drop me an email. I’ll reply as fast as I can.

Yes, I know. I promised this week would be free of politics but I couldn’t resist sharing this civil discussion between TSN 1200 radio host, Ian Mendes (@ian_mendes) and Daniel Munro (@dk_munro), a lecturer at the University of Ottawa and associate director of public policy at the Conference Board of Canada. The issue was precipitated by one of the U.S. presidential candidates but it’s the polite demeanor and the teachable moments from Mendes, Munro and others participating in the conversation that’s noteworty. Enjoy!

That's quite alright Daniel. Your tweet got a lot of positive reaction that far outweighs any blowback I'm getting.

Who likes Tacos? I do. I do. If you’ve been following my Instagram the past few months, you’ll also know I’ve become a fan of Sweet Jesus. But after La Carnita’s offensive Instagram post (Sweet Jesus’ parent restaurant) this week, I’ll probably be getting my tacos elsewhere and satisfying my ice cream cravings at home.

After much public outcry, Andrew Richmond, La Carnita’s owner posted an apology distancing company values from the behaviour employees, and included measures he was undertaking to prevent these types of situations from recurring. La Carnita also took down the offensive post but by then it was already shared all over the web. Do you think they did enough?

Looks like The Black Hoof’s chef Jen Agg won’t be visiting them either. What about you?

Ughhh I was gonna just try and chill tonight but REALLY DUDES?? Wtf is WRONG WITH YOU? pic.twitter.com/XWJdhDVLr0

If you’ve ever considered crowdfunding to:

…but you feel perplexed by where to start and how to make a successful campaign happen…
Let me show you how, step-by-step, in the ULTIMATE CROWDFUNDING MASTERCLASS.
Grab your seat now to my Ultimate Crowdfunding Masterclass Course – there’s still time to register and I’d love to see you there.
Claim Your Spot NOW!

Who’s Really the Biggest Loser?
During Wednesday night’s episode of Jeopardy, host Alex Trebek called contestant Susan Cole a loser because of her tastes in music. The Twittersphere wasn’t impressed. But Cole went on to win the game. Isn’t karma a beatch, Alex?

Step Aside Jack-o-Lanterns
I was going to talk about men with glasses and red sweaters but enough about politics. Halloween pineapples are much more fun. Where did this new tradition begin? Will you be carving a pumpkins or pineapple this year and why?

With all the doom and gloom this week, what’s could be better than an encore performance of Chewbacca Mom and girls in tech parody videos to cheer you up? Check our June 1 episode from the archives.

Something is going on over at BLAB, and we’re not sure it is the smartest move. But a move we totally approve of is Girls Who Code‘s series of videos making fun of the totally erroneous idea that women aren’t able to work with technology. Here is one of their awesome videos:

Really, what can you say after that piece of awesomeness? Well, we have some thoughts on My.Flow – a bluetooth connected tampon that helps avoid leakage. No, seriously. Many thoughts. And Chewbacca Mom has had more than her 15 minutes in the sun, but we’d like to give her a shout-out for being kind of the best thing on the internet this week. We wrap up by throwing some light on Rayanne Thorn’s terrifying article about a bartender trying to sexually assault her by putting something in her drink. Because it wasn’t freaky enough to be a woman in a bar. Thanks for that. Listen up! And, if you like what you hear, please review Ada’s Sisters on iTunes.