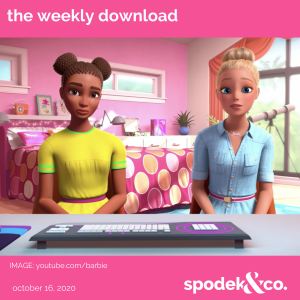 Happy Friday and welcome back to The Weekly Download!

Here’s what you might have missed in the news this week: Facebook finally decides its hate speech policy will include a ban on Holocaust denial and distortion, vlogger Barbie helps kids make sense of racism, the #MeToo movement debuts its next chapter, Apple’s latest launch, Friday Fun, and more.

It’s unclear how Facebook intends to enforce the new expanded policy or how it will define content in violation of it. Facebook says that due to the range of content that can violate these policies, it will take some time to train both reviewers and systems on enforcement.

Facebook hasn’t shared why it has suddenly decided to include Holocaust denials as hate speech. In recent weeks, the company has also increased its policing of QAnon content, and now bans all associated groups, pages and Instagram accounts.

A new initiative from Mattel is sparking the conversation of racism among kids through a three-minute webisode with Barbie. Alongside her friend Nikki, Barbie attempts to discuss the topic of racism in a simple and straightforward way.

“Millions of people across the world are standing up to fight against racism, and they’re doing this because, too often, and for such a long time, people have been treated unfairly,” says Barbie. “This stuff isn’t easy to talk about — which is exactly why we have to talk about it.”

A statement from Mattel says the video was designed to be a conversation starter among both kids and parents.

Why is Barbie facilitating better DEI trainings than many organizations? https://t.co/Fp6PbCdFBN

I will always love barbie vlogs. There have been so many similar types of videos but theirs are truly the best. Barbie is out here talking to kids about mental health, family issues and now systemic racism. I'm a Barbie stan. https://t.co/DsXGSXHArG

Check out the vlog below:

#MeToo Movement Debuts its Next Chapter with #ActToo

Three years after the spread of #MeToo posts online, the movement is taking another step towards ending sexual violence.

Announced Thursday, a digital civil engagement platform known as “‘me too’ Act Too” will provide survivors, allies, and advocates tools for action against sexual violence through curated events, learning opportunities, and more.

The platform offers users so many ways to educate themselves or their loved ones: quiz your children to teach them about consent, complete bystander intervention training, or participate in an online survivors healing series.

From the thousands of available actions, platform users can create their own personal to-do lists. At the end of a session on the platform, users can email that list to themselves, or sign in via a social media account they already have to save the list for future sessions.

Did you tune in for Apple’s big event this week? The tech giant announced a new product line up and shared some interesting changes ahead that have the internet abuzz.

The virtual event unveiled the new iPhone 12, the HomePod Mini, and new MagSafe accessories to allow for faster charging and effortless attachment.

One thing that stirred up lots of chatter online: new iPhones will no longer come with earbuds or wall chargers in an effort to reduce environmental impacts.

The company says the new initiative means fewer raw materials consumed for each iPhone sold, and a smaller retail box, meaning 70 percent more units can fit on a single shipping pallet, reducing carbon emissions. Overall, Apple estimates the changes will cut over 2 million metric tons of carbon emissions annually, the equivalent of removing 450,000 cars from the road each year.

Apple is also removing wall chargers and Lightning earbuds from the older iPhones in its lineup that it’ll continue selling.

Netflix Teases Season Four of the Crown with New Trailer

Are you a fan of The Crown? Get excited for season four with this new teaser from Netflix: