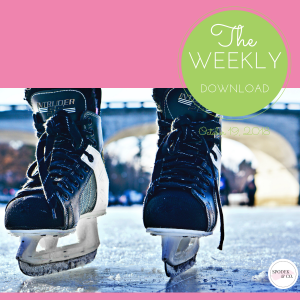 Happy Friday, everyone! It’s been a very chilly week in Toronto, but the digital world, however, never seems to cool down. So, we’re wrapping up our week with an extra hot, extra caffeinated drink in-hand, and we hope you are too.

In today’s Weekly Download we’re looking at Samsung’s long awaited foldable phone, LinkedIn’s new algorithm change, and how the #metoo movement proved one hashtag can change the world. Plus, we’ll show you why Tim Hortons and a Kenyan hockey team are the best double-double ever (wait, wut?)! Get your tissues out!

And for some Friday Fun, have a look at how one creative company is tackling a controversial (some might say stinky!) subject. Let’s get started!

Nostalgia’s never a bad thing. We all have fond memories of “what came before” (rotary phones, anyone?). The problem, as Coca-Cola can attest to, is when brands take nostalgia one step too far, and turn nostalgia into a gimmick. Samsung insists this is NOT the case with their upcoming folding phone.

Unlike the good ol’ flip-phone, this gadget will fold in the middle, basically allowing you to use the phone as a tablet, and vice-versa. Many are touting the “double the screen size” benefits, and might just be the tool you need to take your selfies to a new level. That said, there are also cons to having a larger, bulkier folding device, though bigger phones seem to be the new norm these days.

Those in the know expect to see the launch of the long-rumoured foldable phone at Samsung’s Developer Conference next month. Keep your eyes peeled!

Three cheers for the underdogs! LinkedIn has finally updated their algorithm to support better post engagement – and not JUST from its “top creators.”

Heck, it’s human nature to want some feedback on your work.

And LinkedIn realized they were in trouble as they saw engagement dropping, saying “…our members generate tens of millions of viral actions (likes, comments, and reshares), and the number is increasing more than 50% YoY. However, we found that these increases weren’t equally distributed. In fact, at the beginning of 2018, we were in danger of creating an economy where all the gains in viral actions accrued to the top 1% power users, while the majority of creators who don’t receive much feedback were receiving less than ever.”

The tweaks have updated the system to distribute posts more equally—which means more reach for your updates—and in a perfect world, increased engagement (which of course, leads to more reach, and so on).

It’s not perfect yet, but LinkedIn is already seeing results—more diverse content is being shared and content creators who weren’t seeing feedback are starting to re-populate their feeds again. And that’s a win/win for all of us!

The #MeToo Movement: How One Hashtag Changed the World

Ok, maybe “changed the world” is a bit hyperbolic, but the #metoo movement has certainly opened millions of eyes up to the problem of sexual harassment and abuse.

In fact, a new Pew Research study has proven just how global the #metoo movement has become over the past year. #MeToo has been used more than 19 million times on Twitter. And while 71 percent of those tweets were in english, a healthy 29 percent were in other languages, a clear indicator of its reach and its importance.

People are sharing their personal stories, and working hard to create a less-stigmatized atmosphere around sexual assault in ALL its forms. And this is a very good thing, and a much needed change, no matter if you’re male or female.

Tim Hortons Scores Again with “The Away Game”

When Canada’s favourite coffee chain caught wind of a lonely hockey team in perhaps one of the most unexpected places in the world, they decided to do the most Canadian thing ever! They proved that sometimes, dreams DO come true.

Picture this: twice a week, twelve members of Kenya’s only hockey team convene at a small rink in their country’s capital, Nairobi. Not surprisingly there are a few challenges facing these East African hockey fans when it comes to having an active team. Like finding skates and hockey sticks. Oh. And finding anyone else to play with!

That’s right. The aptly named Ice Lions had never played against another team. Well, they have now! And the biggest surprise of all was waiting for them at the arena. Please, watch this video. I promise you it will make your day, week, year. Kudos, Tim Hortons. Kudos.

“Nothing says confidence like an armpit packed full of chemicals and aluminum.” That’s how this creative and hilarious ad campaign from natural deodorant maker Kopari begins. This cheeky fun ad takes what could be a downer topic (chemicals are bad) and turns it on its ear. Have a look.