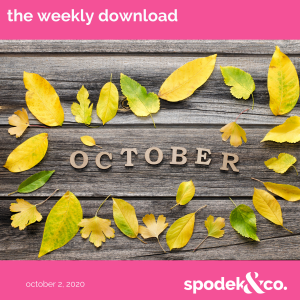 Let’s dive right into this week’s news: Facebook introduces cross-app communication for Messenger and Instagram users, Instagram unveils new guides to make the most of Shops, Twitter asks users to pause and reflect before tapping that retweet button, Friday Fun, and more.

Business owners and social media managers breathed a sigh of relief this week when Facebook announced new updates that would allow users to communicate across Facebook-owned apps through Messenger.

The update makes it easier to communicate with followers and customers, allowing for a centralized approach to customer service. Individuals will need to opt in through their privacy settings in order to be reachable across multiple platforms. To clarify the new update does not mean that Facebook is merging your inboxes.

Messenger-inspired features will also be coming to the Instagram inbox, giving users the ability to change chat colour, react with emojis, watch videos together, and more. Users can also choose to make their messages expire or disappear after a certain amount of time – hmmm, haven’t we seen that before?

Instagram Shares New Guide to Make the Most of Shops

As we gear up for the holiday season, Instagram is making it easier for businesses to utilize Instagram Shops successfully thanks to a series of new how-to guides.

‘The Seasons for Shops’ minisite includes several different guides based on important topics, including:

Guides include written content and lots of visuals to help launch Instagram Shops successfully. Looking for some guidance to launch your business on Instagram Shops? Let us know how we can help.

Twitter Asks Users to Pause and Reflect Before Retweeting Articles

In yet another effort to combat the spread of fake news, Twitter is asking users to pause before retweeting content including article links. The new feature, which underwent testing earlier this year, is being rolled out across the platform following positive results.

We shouldn't have to say this, but you should read an article before you Tweet it. https://t.co/Apr9vZb2iI

So, we’ve been prompting some people to do exactly that. Here’s what we’ve learned so far. ⤵️

After a simple joke referring to Toronto as “Downtown Canada” went viral on Twitter, users and brands alike joined in on the fun this week:

Some of our favourite responses:

The rumours are true! 🙌

What do you love most about Downtown Canada? 😂 #Toronto pic.twitter.com/Pr6C3twY9B