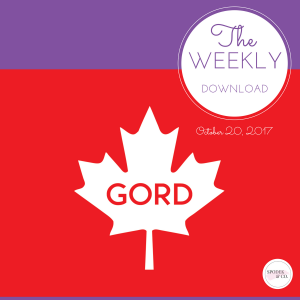 What a week – from the excitement surrounding a Google company’s new home in Toronto, to the sadness we shared as a nation at the loss of Tragically Hip frontman Gord Downie and the #MeToo movement, it’s been an emotional one.

Other topics on the docket today include Pinterest’s new search advertising capabilities, Facebook’s Explore feed and some Friday Fun.

Sidewalk Labs, Google’s sister company, is coming to Toronto. After looking at hundreds of international cities, Toronto’s east waterfront has been chosen as the best site for the company’s take on a modern city.

What made Toronto a perfect home for Quayside?
An “unequalled diversity and spirit of openness,” a booming tech sector, and government commitment to Waterfront Toronto’s redevelopment plans helped seal the deal according to Sidewalk Labs.

Canadian icon and Tragically Hip frontman Gord Downie passed away this week, and the entire nation has come together to remember and celebrate him. From bandmates and fans to Prime Minister Justin Trudeau, tributes from across the country flooded social media when the news of Downie’s death broke on Wednesday morning.

There will never be another one like you, Gord. Rest in peace my friend.

So much more than a performer, Downie was an activist, nature lover, hockey fan and storyteller, and will be greatly missed by many.

If you were checking your feeds this week, you probably saw several posts that included #MeToo. Meant to draw attention to the systemic sexism in our culture, the #MeToo meme has created a forum for discussion among friends and peers.
While the movement has positive intentions, some say the meme and the feelings of outrage or frustration we feel as a result leave us too emotionally exhausted to act meaningfully.
The key to transforming these issues from meme to real movement? Putting down our devices and talking to one another about how we can make a difference.

Pinterest advertisers will now be able to target customers searching for potential products on the platform, the company announced this week. The new development in advertising will allow businesses to put an ad in front of a user at a moment when they’ve signaled intent or interest in an idea or product through search.

Advertisers will be able to further define their target search ads against exact match keywords, or phrases and broader match targeting. For smaller businesses with less experience running search campaigns on the platform, Pinterest’s autotargeting is there to help.

Facebook’s Explore feed is finally available to everyone

Facebook’s new Explore feed is a secondary feed that will show suggested content and Pages to users based on what they already interact with. The update comes as Facebook tries to keep up with competitors like Google, Twitter and Snapchat when it comes to user attention.

One important thing to note about the new feed – it seems to be ad-free (for now).
Have you checked out Explore? Share your thoughts with us!

We know what we’ll be doing next weekend…