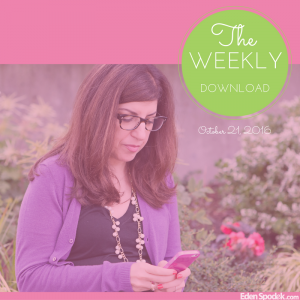 What a week. I’m an ombré (or a wearer of balayage to be specific) and although I hope you think I’m nice, from now on, I’ll wear the “nasty woman” badge with pride too. So enough about politics, let’s have a peek at what other intriguing stories have been in my feed this week.

As always, if you have something to say, add it to the comments or drop me an email. I’ll reply as fast as I can.

For all the millennial bashing we hear, there’s always a great group of hard-working young talent who defy the stereotype and reinforce that these characteristics transcend birthdates. This week Marketing Magazine announced this year’s group of honourees. Big congratulations go out to all of them with a special shout out to my former colleague and #digitaledu guest speaker, Alanna Glicksman who recently took on the new role of senior account manager Snapchat.

About a week or so ago, I received a direct message on Twitter from Christopher S. Penn encouraging me to make sure to connect with him on other platforms if I hadn’t already done so. He sent/is sending a similar message to other people who are connected with him on the microblogging platform as well. Why? Because with its current financial woes and lack of direction, Twitter’s future is uncertain. For those of us who’ve been using Twitter for several years, we see the evolution and many of us prefer the old days when the focus was about relationship building and conversations. How much longer will you be using Twitter? Some people believe not much.

Yikes! So, while I was trying to check one of the stories I saved for this week’s post on Twitter, after several attempts using different Twitter clients to access the link, I checked to see if Twitter was down and this is what I learned. Let’s hope these sites are back up and running soon and the worst of the latest rash of Cyber Attacks is over.

Congratulations to Cleveland; We’re Sorry Some of Your Own Were Mistreated

What a week it was for the Blue Jays! They swept the ALDS finals against Texas. Unfortunately, they weren’t as successful against Cleveland who claimed the ALCS title. There’s always next year. In the meantime, good sportsmanship and Canadian hospitality were severely lacking at the Rogers Centre on Monday night when Gina and Joe Kijowski from Cleveland felt anything but welcomed when they showed up at the game in their home team jerseys after driving all the way from Youngstown, Ohio. CBC wrote about their experience and in return, the Kijowski’s received about 200 apologetic messages on Facebook and 10 phone calls. Brad Oliver, a Blue Jays fan, apologized for all Jays’ fans and even offered to buy them dinner on their next visit. Needless to say, their jerseys will probably remain at home.

Let’s Tell America It’s Great (or Not)
Let’s face it, our neighbours to the south are facing one of the most divisive times in modern history with the upcoming election. Toronto creative agency, The Garden, created a campaign to help bring some levity for our friends in the U.S. and Jimmy Kimmel decided to return the favour.

I’m pleased to announce that despite all the smear campaign nonsense going on right now, there isn’t any included in this episode. Which doesn’t mean Angela and I won’t be discussing other nonsense, including a warning about Facebook author pages from author, Lauren Layne.

In other bad news stories, Motherboard recently reported that tech leaders, including Elon Musk and Tim Cook, aren’t following women on Twitter. But thankfully entrepreneur Mark Cuban says he has a plan to make Silicon Valley more woman-friendly. A group of tech leaders in Canada including the chief exec of Shopify, are working with Ladies Learning Code to expand their efforts nationally and this week we have two tool tips: The Globe and Mail has launched “GloBot” – a bot developed to share the Globe’s U.S. election news on Facebook Messenger. For those of us wanting to go cashless, we now have a Bitcoin ATM in Toronto and our hashtag this week is – #WhataDoctorLooksLike –  in response to Delta flight attendants who in an emergency situation refused to believe an African American woman on a flight was a physician.

Listen up! And, if you like what you hear, please review Ada’s Sisters on iTunes.