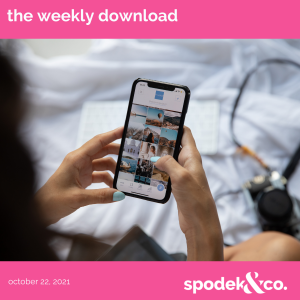 Welcome back and Happy Friday!

This week on your favourite round-up of digital updates: Facebook plans to change its company name, Netflix employees walk out, Instagram tests longer Stories and announces desktop posting. And, of course, some Friday Fun.

It’s all in The Weekly Download – let’s dive in!

According to a Facebook insider, the social media giant plans to announce a company name that will position it as a parent company, overseeing groups like Facebook, Instagram, Whatsapp and others, and signals its desire to be known for more than social media and its perceived negative aspects.

Facebook CEO, Mark Zuckerberg, is expected to make the announcement at the annual Connect conference on October 28th, however, the new name could be revealed even sooner. It’s expected that the parent company will be renamed, but the social platforms, Facebook and Instagram, will remain the same.

As noted by The Verge, after Facebook’s recent scrutiny over leaked internal documents and falling public trust, they will likely benefit from a new identity.

After the release of Dave Chappelle’s most recent comedy special, hundreds of Netflix employees have walked out in protest.

Protestors are calling Chappelle’s latest special transphobic and are urging the streaming service to stand in allyship by removing the content from the platform. They also want Netflix to continue to integrate more “intersectional” works to represent more of the LGBTQ+ community.

The particular concern came from Chappelle’s derogatory “jokes” that described violence against transwomen. Netflix stated his words did not exceed “the line on hate” and will continue to stream this content on its platform.

Later, Netflix recognized that they responded to the situation with a lack of empathy and have work to do within the company and to better review the content they share.

After the company’s recent Reel updates, they’ve decided to test extending its Stories to up to one-minute increments. That means the content will no longer be broken up into four segments for a minute’s worth of content – making it easier to tell your story and get creative.

This move comes after Instagram decided to increase the time of Reels from 30 seconds to one minute a couple of months ago. The idea is that you’ll now be able to share your Reel(s) content in full when sharing to your story. Which as we know, is a great way to expand the reach of your content.

If you haven’t hopped on the Reel train yet – now’s the time to start!

Social media managers – this one’s for you.

Instagram has announced that users will officially be able to publish both images and videos from its desktop platform. Finally!

Although users will not be able to publish Reels or Stories – yet – they will be able to upload photos or videos that are less than one minute long. This new addition to the desktop platform will make it easier for publishers to keep their content all in one place.

This announcement makes us hopeful Instagram will bring its entire suite of tools and publishing to the desktop in time.

Let’s head into the weekend with some wholesome laughs courtesy of the hilarious Abby.