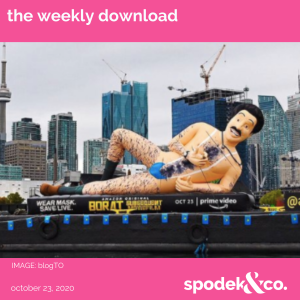 Here’s what news you might have missed this week: Google becomes the focus of an antitrust lawsuit, Instagram cracks down on influencers posting sponsored content, Facebook launches Neighbourhoods, The New Yorker suspends Jeffrey Toobin for that NSFW Zoom call, and as always, we’ll be ending off the news roundup with some Friday Fun – keep reading!

Huge news this week concerning Google – this Tuesday, the U.S. Justice Department filed an antitrust lawsuit against Google, accusing the company of illegally using its market power to destroy its competition. According to the lawsuit, nothing is off the table – including a dismantling of the internet search and advertising giant.

The complaint says Google acted unlawfully to maintain its position as the leader in search and search advertising on the internet and claims that “absent a court order, Google will continue executing its anti-competitive strategy, crippling the competitive process, reducing consumer choice, and stifling innovation.”

The U.S. government said Google has nearly 90% of all general search engine queries in the United States and almost 95% of searches on mobile. According to Attorney General Bill Barr, Google does not compete on the quality of its search results but instead success bought through payments to mobile phone makers and others.

The lawsuit marks the biggest challenge by the United States to the growing power of tech companies in a generation.

Google says the lawsuit is “deeply flawed,” adding that people “use Google because they choose to – not because they’re forced to or because they can’t find alternatives.”

Following a recent investigation by the UK Competition and Markets Authority, Instagram has vowed to do more to protect consumers regarding sponsored posts.

Just like influencers in other countries, Instagrammers in the UK are required to highlight commercial partnerships by tagging posts with #ad or #sponsored. The CMA’s recent findings prove that many influencers aren’t following the rules, and this could result Instagram facing legal action. To avoid this, the social platform has vowed to increase its action on sponsored posts.

To prepare for Instagram’s new, stricter rules around sponsored posts, brands should ensure their partnership policies and procedures for influencers are clear and streamlined.

Reach out to us if you need a hand.

Staying connected has never been more important, and Facebook is taking note. The social media network recently launched a test of Neighbourhoods, a Nextdoor-style feature to help Facebook users connect easily with others within their immediate vicinity.

Those included in the test will have the option to ‘Get Started’ and follow prompts to discover Neighbourhoods, including the setup of a profile separate from their main Facebook presence. The functionality of Neighbourhoods is similar to Nextdoor, which has around 27 million monthly active users, and has seen a significant surge in interest during the pandemic.

Twitter is providing another way to discover new tweets by giving users the option to share topic listings in tweets, DMs, and even off the platform, connecting others to key discussions of interest.

Your interests, fandoms, and hobbies are the coolest. And now you can share them by sharing Topics.

From a Topic’s page, tapping the new share icon lets you send a link to the Topic in a Tweet, DM, or outside of Twitter. pic.twitter.com/UzzFcdl5Hn

Making Twitter an easier place to understand and navigate – especially for new users – has been a key focus for the platform. Over the past couple of years, Twitter has added several updated tools and options, hoping to simplify various processes within the app.

Twitter added the option to follow specific topics last year as a means to help users find relevant content. Topics allow users to find key topics of interest – even if they don’t know who to follow – leading them to more specific profiles of interest.

After reportedly exposing himself on a Zoom meeting last week, The New Yorker has suspended staff writer Jeffrey Toobin.

According to a story first posted by Vice, Toobin’s transgression occurred during a virtual conference between New Yorker staff and a local radio station.

Toobin says the entire incident was accidental. “I believed I was not visible on Zoom. I thought no one on the Zoom call could see me. I thought I had muted the Zoom video,” he told Vice.

Moral of the story: be careful on Zoom, people.

And speaking of Zoom, this dad had a genius Halloween costume for his daughter this year:

I made a killer Zoom Meeting costume for my daughter. #Halloween2020 pic.twitter.com/bdKbgGZcA5

Oh, and did you hear about the giant inflatable Borat that’s taken over the Toronto waterfront? Sadly, that’s not a joke.

A giant inflatable Borat has taken over the Toronto waterfront https://t.co/KKYB2yOHoB #Toronto #Borat