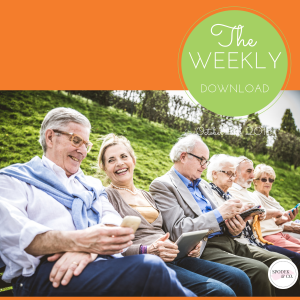 Happy Friday, everyone! We hope everyone had a successful work week and have some lovely R&R planned for the weekend.

We’ve got some interesting reports on the docket today: Mountain Equipment Co-op tackles racial representation, Snapchat cracks down on bullying, Baby Boomers take over Facebook, and Apple’s fixing its ‘beautygate’ bug. And, of course, we’ll wrap it all up with some Friday Fun.

Grab your coffee and settle in!

One stunning Instagram shot might have just moved the needle on racial representation (or lack thereof) when it comes to many “outdoor adventure” companies and their advertising.

According to a U.S. national parks study, only 7 percent of black folks visit national parks. While 78 percent of all parks visitors are white. There seems to be a narrative that BIPOC don’t enjoy the outdoor compare to their white friends. This is not rooted in actual reality but a myth perpetuated by marketing that caters to predominately white audience. If you don’t believe, check out companies such as @mec, @arcteryx @arcteryxcanada @hellyhansen who fail to diversify their adds. Painting a narrative that people like me don’t enjoy the outdoors. I love nature and spending time outside! I hope these companies can diversify their adds. Sadly I couldn’t find any studies in Canada. #truthfultuesday Pc: @neverbadtimeforchanges

Last March, Judith Kasiama posted a breathtaking Instagram photo of herself atop a mountain that exuded happiness. And she took that opportunity to call out (and tag!) companies like MEC, Arcteryx Canada, and Helly Hansen for perpetuating the myth that somehow people of colour don’t enjoy the outdoors, and outdoor recreational sports.

MEC, for one, took notice—and admitted she was absolutely right! The company called Kasiama for help, and together they began a dialogue on diversity with the goal of more accurately representing their community of over five million members.

In a letter released last week, CEO David Labistoursaid, “White athletes hold the spotlight in advertising, while the diversity that exists and continues to grow in outdoor spaces isn’t represented in the images we produce and promote. The truth is that we haven’t represented the diversity of Canadians or of our 5 million members…this letter is about recognizing the role we’ve played in under-representing people of colour in the outdoors, and committing to change.”

Protect Yourself from Snapchat Bullies

Snapchat is designed for the user to protect and control their own communities. Each account is private upon activation (only you can change it to public), and friends must be manually added. However, we all know bullies will find their way in, and Snapchat recognized that too, and has made reporting bullying behaviour easier.
“If you ever receive a Snap that you believe is bullying or offensive, you can easily report it to us right in the app. Just press and hold on the Snap, then tap the 🏳button. Let us know what’s going on — we’ll always do our best to help! You can learn more at our Safety Center,” said Snap. 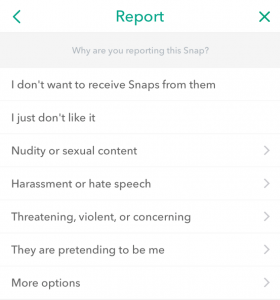 eMarketer released a report this week that took a close look at Facebook and their user base. And it turned out the cool kids were right: the Baby Boomers are taking over! 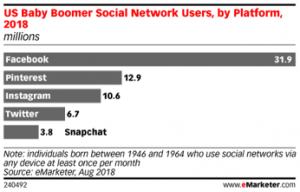 And it makes sense. For Boomers, Facebook is a familiar space filled with friends and family. It serves as an easy way for loved ones to share photos and personal updates, and allows folks living far apart to stay connected.
Why do you think the young folks are leaving Facebook? Have us boring oldies made it lame to use? (LOL) Let us know what you think in the comments below.

Apple to Smooth Over “Beautygate” Bug

Apparently, selfies on the iPhone XS and iPhone XS Max are a little too good to be true. In fact, they almost look purposely smoothed out or airbrushed by a face tuning app. And users are complaining.

According to Business Insider, the smooth processing is due to shutter speeds when capturing front facing photos. The new Smart HDR Feature slows down shutter speed which is designed to eliminate shadows and control highlights, which ultimately smooths out the appearance of skin. And hey, there’s nothing wrong with putting your best face forward, we all share our best pics online—but being automatically photoshopped doesn’t sit well with most of us.

The fix will be integrated into the next iOS update which does not currently have an official release.

Of course, no Friday would be complete without a dose of fun!

IHOP has recently earned some hilarious PR coverage on Twitter. What started as a couple of buddies enjoying some eggs and bacon turned into a “lid-sync” series. Sit back and enjoy!

Me and Matt are no longer allowed in @IHOP pic.twitter.com/b2PbEm6gya