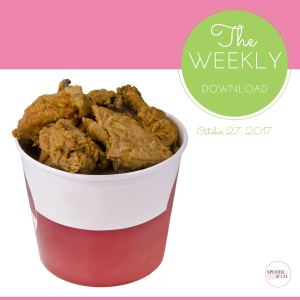 Hello, Friday! How we missed you. What’s on your agenda this weekend?

Canadians scrolling through their Twitter feeds will soon see a special tag on any ads related to the election, as well as who placed the ad and how they were targeted.

The new transparency initiative follows the release of information surrounding Russian interference in last year’s presidential election through other means of digital advertising on platforms like Twitter, Facebook and Google.

Though we’re short on details for now, a spokesperson for Twitter said the new measures would be rolled out “in the coming weeks.”

Yikes – this could be bad news for Facebook publishers.

Facebook is reportedly testing a new version of News Feed where content from followed Pages doesn’t simply appear as you scroll, as we have grown accustomed to. Instead, News Feed content in the test scenario will only be displayed in the News Feed if publishers have ponied up the dough to promote. For Pages that have generally relied on the fact that they have the attention of their followers on News Feed, it’s certainly a curve ball.

So why the change? Facebook hopes to better connect users with the content they care about (and of course, to generate more money). According to a recent blog post published by the social network in response to news of their testing, they have no plans to roll this test out further – publishers may be in luck for now.

We’re keep an eye on this for our clients and paid social content is something we’ve been working on with them for quite some time now. Expect to see this trend expand in the new year.

Though you wouldn’t normally connect the fast food chain with inspirational or thought-provoking content, Burger King’s new 3-minute spot serves up just that. It’s an emotional look at bullying and those who sit on the sidelines.

Watch it for yourself:

We all remember the Unicorn Frapp that left many of us in a sugar coma earlier this year. Starbucks is at it again – just in time for Halloween!

You go, ghoul. 🏃⚰ #ZombieFrappuccino (Available in the US, Canada and Mexico, while supplies last)

The new Zombie Frapp is another Starbucks creation that Instagrammers everywhere are sure to love. Green and purple with a whipped topping meant to look like brains, it’s certainly something to see. Will you be trying one?

The reason why KFC only follows 11 random users on Twitter

11 Herbs & Spices. I need time to process this.

Needless to say, the Internet lost its mind upon this discovery. Well played, KFC.

the person that runs the KFC account needs a raise. I don't care how much they make now. GIVE THEM A RAISE.

Fast Co. says women are making less than men in the creative industries by a whopping 32%! And in The Star’s look at the best Canadian cities to live in if you’re a woman, Toronto came in… 10th! This is despite the  innovative brains – like the people who came up with Sidewalk Toronto. And all the awesome tech at the Deloitte Greenhouse this week. If you’ve ever wondered if you’re being paid what you’re worth in this wacky technology industry, Stack Overflow can help.